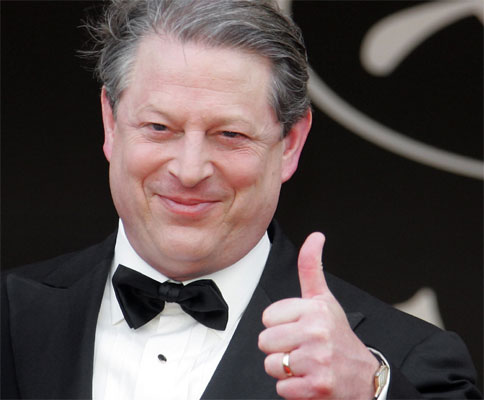 In the world of supermarket tabloids, “The Star” is pretty much toward the bottom of the basket. If “The National Enquirer” –which gets one of ten stories right and is usually just lucky– is ranked number 1, where do we put “The Star”? On the cover this past was their regular fodder of Brad Pitt and Jen Aniston teaming up behind poor Angelina Jolie‘s back. It’s a hoot. (Angelina must have a good sense of humor by now!) The Star is for reading at best while having shoes shined or nails done.

But yesterday they had a scoop! Former VP Al Gore had a two year affair with Larry David’s ex wife, Laurie. There are no denials or confirmations from the parties, and no actual sources quoted. There’s no recognition of Laurie David actually being in a relationship for the last three years with another man–the man for whom she left her husband. There’s no logic to it, or journalism. Just a leap.

Over at the usually calm wowowow.com, someone named Margo Howard believes it. She says this must be the reason Al Gore has not commented on the BP oil disaster in the Gulf. Sure, Margo, why not?

I’ll tell you why not: it’s not true. Indeed, Laurie David has done more than just co-produce “An Inconvenient Truth.” She went on a road trip with Sheryl Crow. Hey, Margo, maybe they had an affair! And Laurie David has also been very involved with Robert Kennedy Jr.’s NRDC. She’s been at all of his events. Why not him?

Laurie David was so upset when she heard about The Star story that she called Arianna Huffington directly and gave her a denial. That didn’t seem to matter. Whoever launched this attack should be pleased with themselves; they did a good job. The internet let The Star be like a guy in a movie theater yelling “Fire!” They didn’t stop to ask questions, and they were too embarrassed to backtrack when they were wrong. And the media just went along with it.

Get a grip, folks. And take a better look around. There are juicier things just under your noses.