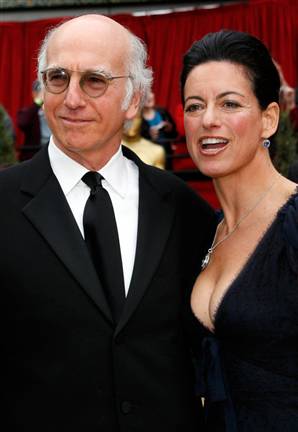 Wait a second. The Star magazine, I know, is certainly the place to get the news. But their report today of Al Gore‘s so called affair with Laurie David has some, er, inconvenient truths.

Laurie David left Larry David in 2007 for Martha’s Vineyard landscaper Bart Thorpe. He was married to Julie Flanders, daughter of the number 1 real estate family on the island. It caused quite a commotion.

According to my sources, Laurie and Bart are still together and “very much in love.” Laurie is supposedly on the Vineyard now with Thorpe.

If anything, my sources say, Laurie David was telling friends back in 2007, when she and Gore were hot and heavy promoting “An Inconvenient Truth,” that she was in love with the former VP. “If they had an affair it was back then,” says a source.

Of course, anything is possible. Laurie and Thorpe do spend time apart. David’s kids go to school in Los Angeles. Thorpe’s business keeps him on the Vineyard. But at some point last year Thorpe was seen shopping for an apartment in New York where they could all live together.

“I guess Bart could have been a front for Laurie,” says a Vineyard source. “But it seems very complicated.”

For now, people who are excited about all this news might do well to Curb their Enthusiasm.