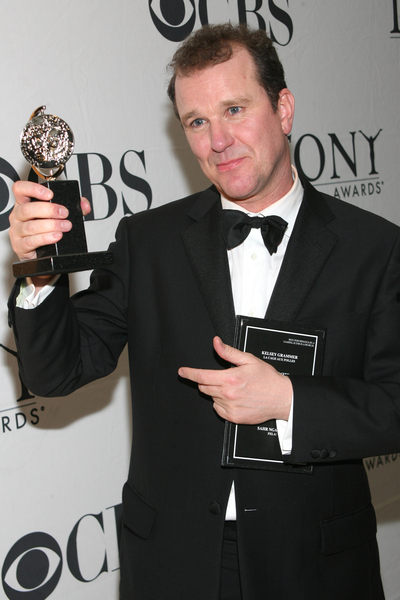 So you’ve won a Tony Award? What next?

As a bunch of actors won Awards last night, they are also planning their exits from the roles that just made them the objects of affection.

“”Fences” closes in two weeks, for example. Catherine Zeta Jones will be packing up soon from “A Little Night Music.”

What about Kelsey Grammer and Douglas Hodge in “La Cage”? They’re scheduled now to stay with the show through September. Grammer will likely continue, and he wants Hodge–who won Best Actor in a Musical last night–to stay on.

But that may be not be so easy. For one thing, Hodge says, it’s a financial matter. And a practical one, what with taxes in two countries involved. “They’re going to have to pay me a bit more money, I’m afraid,” Hodge said at the “La Cage” after party at Hurley’s. (Actually several shows were scattered through Hurley’s. Scarlett Johansson and Ryan Reynolds led the “View from the Bridge” gang in another area.)

Also, Hodge has written a musical that he wants to try and mount on Broadway. It’s called “Meantime.”

“It’s set in airport, and it’s about love,” he said, trying not to give too much away.

H e also told me that his whole bit last night of fearlessly going through the audience was very scary. “When we rehearsed none of those people were sitting in the seats. They’d never seen me before. It was frightening!”

As for Hodge and Kelsey Grammer switching roles, something they’d originally discussed when the show opened: “That’s not going to happen now,” said Hodge. “I don’t even think Kelsey wants to play my role.” And as for meeting the former Frasier Crane on Broadway: “It’s the best thing that’s ever happened to me,” said Hodge.”We want to do a sitcom together. Kelsey wants to produce it.”

So will David Hyde Pierce, now a Broadway star, replace Hodge if he leaves? Fans want the Doctors Crane to reunite, but Grammer told me it won’t happen. “Too much television,” he said. Also, brothers playing long time lovers is kind of…ick.