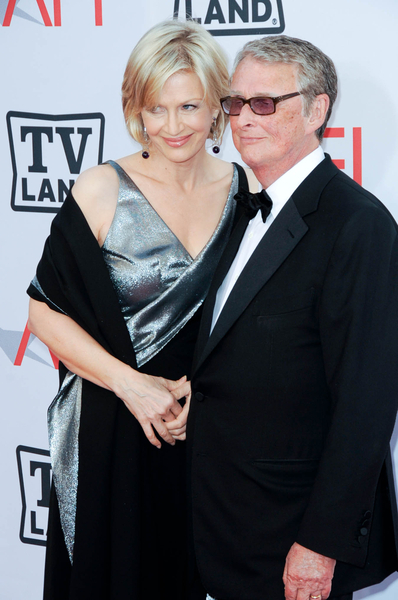 Jack Nicholson showed up very late for Mike Nichols’ big AFI tribute last week in Hollywood—he’d been watching the Lakers, of course. Then Nicholson made everyone including Robin Williams—who later riffed on this—scratch their heads with his comments.

Nicholson said: ”This is so wonderful about what every one is saying about you.  Remember, though, Mike: even oysters have enemies.” Jack tried to explain himself by adding:  “I know you like animals a lot , that’s why I told the oyster joke.”

The rest of the A List stars who came out for director Nichols (pictured here with wife Diane Sawyer) were a little obtuse. You can see it all on June 26 on TV Land, but our pal Leah Sydney was there and sent along some of the bon mots from the show.

Some of the tributes were odd, others poignant or funny. Paul Simon and Art Garfunkel made a surprise appearance to kick things off and sang “Mrs. Robinson” from the “The Graduate.” That alone would have been worth the price of the evening. Then an avalanche of stars rolled through Stage 15 at Sony Studios (the same place where Judy Garland once skipped down the Yellow Brick Road.)

Nichols, by the way, counts Albert Einstein as a cousin, which of course was much fodder for jokes. Mike’s famous comedy partner Elaine May was the first to bring it up. She said: “Albert Einstein was a very sad man when he died because he hadn’t achieved a Combined Field Theory and that’s gotta be depressing.  But if he’s watching tonight- he’s got to be immensely happy that he’s Mike Nichols’ cousin.” She added: “This is a very emotional night for me because 30 years ago I bought this dress for his first lifetime achievement award.”

Cher told the most revealing story of her own career, recalling that when she’d gone to see the trailer for “Silkwood” at a Westwood theater, the crowd clapped for Meryl Streep’s name, Kurt Russell’s name, but laughed when her own name appeaered on the screen.  She left the theater crying, and called Nichols.  “He told me not to worry. That they would be clapping after they saw the movie.”  He was right. “Silkwood” was the first of three films, including “Mask” and “Moonstruck” that made Cher a movie star.

Natalie Portman: “In ‘Closer,’ Mike  cut out nude scenes when I had second thoughts. He also made sure I learned how to pole dance, which is an tremendously useful skill in this economy.”

Robin Williams: “Hey you were a brilliant child.  [Nichols was certified as a genius at age 12]. “It’s rumored you had final cut at your circumcision.”

Of course the great Nichols got in the last word: “I got to see my own memorial and I’m still alive. Sort of.”

We’ll have to watch TV Land to see all the little asides and crack ups. The AFI Tribute special is always a lot of fun!