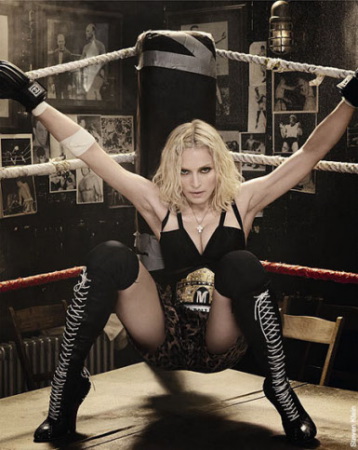 Is imitation really the sincerest form of flattery?

Madonna must be trying to control all of her emotions right now on this subject. Photographer Steven Klein, who’s worked with Madonna a lot in the past, is the director of Lady GaGa‘s new eight and a half minute video “Alejandro.”

Eyes closed, “Alejandro” certainly sounds just like a Madonna record, from top to bottom. Stephanie Germanotta‘s voice is processed just the way Madonna’s was during her the late 80s and early 90s, from “Express Yourself” and “Like a Prayer” through “Justify My Love.”

But open your eyes, and Lady GaGa and Klein are just regurgitating “Vogue” or “Justify My Love.” We’ve been here, he’s been here, only Ms. Germanotta hasn’t been here. The only thing completely different about her Madonna worship is that GaGa plays the piano herself. She may even be writing the songs.

Isn’t it funny that no one thought to totally rip off Madonna years ago? I guess one obstacle was the money needed to make such an enterprise successful. But Germanotta obviously has convinced her backers this is the moment for Madonna redux. It has to be embarrassing for Klein, who must know that he’s made either a Madonna rip off or a tribute. I guess it will depend on how he spins it to the Original GaGa.