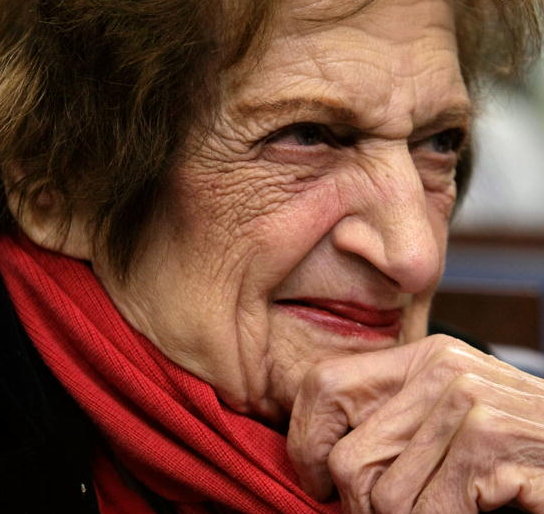 Helen Thomas has retired. Her career ends in disgrace thanks to comments she made on May 27th to Rabbi David Nesenoff at a White House event.

The New York Times, which did not even mention what was going on previously, now reports the story online.

The Times has simply ignored the entire Thomas fiasco, even though: Thomas’s lecture agent has dropped her, her co-author has disavowed her, and there’s an open letter to her in today’s Jerusalem Post.

The Times–and all the New York newspapers–have completely ignored the fact that man who interviewed Thomas and posted the now infamous video on You Tube is a rabbi who lives right here on Long Island. Considering how much the papers want to increase their local coverage, you’d think they’d be camped out on Rabbi David Nesenoff‘s front yard. Nada.

See the video at www.rabbilive.com.

The last reference to Rabbi Nesenoff in the New York Times was in 1996.

Maybe it didn’t happen. Maybe the eldest member of the White House Press Corps didn’t insist on video that the Jews in Israel “get the hell out of Palestine” and return to “Poland or Germany.”

Meantime, the Times story today on jailed money manager Ken Starr reflects a complete lack of knowledge of anything in that story. Starr’s been in jail since June 1st, but the Times can only get movie director Robert Benton to say he can’t help but feel sorry for him. There’s curiously no mention of Starr’s business partner and connected at the hip pal, Marvin S. Rosen, former Democratic National Party fundraiser from 1995-97 for President Clinton.

Business writer Nelson Schwartz also somehow missed the point of the lawsuit brought by the estate of Joan Stanton against Starr. The other defendant was film producer and Planet Hollywood owner Keith Barish, who settled with the estate. Starr, the Stanton lawyers complained, had directed Stanton’s millions into Barish’s failing Planet Hollywood despite instructions not to make that investment. Barish isn’t even mentioned in today’s Times story.

As a Democrat and a liberal, I’d hate to think these omissions are because Thomas has stood for progressive politics and Rosen is a Democrat.

PS The Washington Post has equally avoided the Thomas story, making passing reference in a blog (written by someone from the Conservative right) and a short summary of it in Howard Kurtz’s column today.