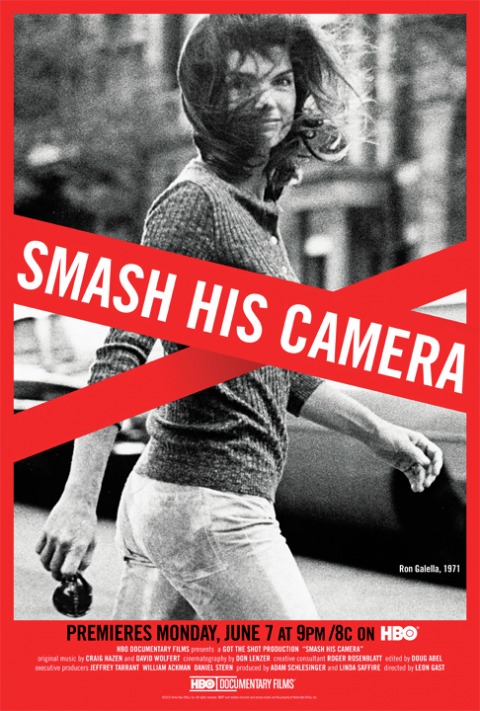 Ron Galella: if you lived in New York in the 1970s, he was a villain with a camera. Stalking Jackie Onassis like she was a rare rhinoceros, Galella was the first American paparazzi. Now he’s the subject of a new documentary on HBO called “Smash His Camera,” which will also have a theatrical release.

On Tuesday night at MoMA, and then at the Monkey Bar, Galella became a movie star. “Smash His Camera” started at Sundance last January, and has made it all the way to the big time. Expertly directed by Leon Gast, “Smash His Camera” now suggests that if Gallela hadn’t driven everyone crazy taking their pictures, an important historical archive would not have been created.

Still at the screening, Nobu owner Drew Nieporent said, “Wasn’t he a bad guy when we were growing up?”

Not any more, apparently, even though Jackie O took Gallela to court not once, but twice.

The word paparazzi always had a tinge of menace–camera toting maggots a-prey on celebrities–and got a worse name after the throng chasing Princess Diana through a Paris tunnel caused her death.  But the Ur-paparazzo, a lone figure lurking behind Central Park foliage, disguised in funny wigs and hats, was Ron Galella.

A career defining encounter with the obsession of his life provides the title. (It was not his gorgeous wife Betty, to whom he proposed within two minutes of their meeting and whisked off to bed “to seal the deal.”) Jackie, by this time, O, commanded her secret service detail, “Smash his camera.”

It’s easy to be competent in photography, says artist Chuck Close eloquently in this biopic, hardest to be distinguished because of all the arts photography lacks the human hand, begging the question, is self-proclaimed superstar Galella, artist or stalker? This topic was much debated at a premiere screening at MoMA on Tuesday. Dick Cavett, Floyd Abrams and son Dan, Bob Balaban, Marie Brenner, David Margolick among photographers Harry Benson, Sonia Moskowitz, Neil Leifer, watched as Galella on film presented his extensive, historic archive, millions of photos of Michael Jackson, Elizabeth Taylor and Richard Burton, Robert Redford, and more, neatly stored in his Montville New Jersey mansion. Galella explained his guerilla tactics, how he got his “Mona Lisa” shot, “Windblown Jackie,” the former first lady in jeans and t-shirt walking, her tight torso half turned toward his camera, her hair strewn across the iconic semi smile.

Gossip doyenne Liz Smith, splendid in yellow silk, suggested in her Q&A that Jackie, despite taking him to court, loved his attention. Betty, shouting out from the audience, reminded everyone that he was Andy Warhol‘s favorite photographer because Galella recorded the famous in the unexpected act of being who they really are.  Roger Ebert called him a “national treasure.” Is he still an idealist, asked Smith. Oh yes, it all paid off, said the unrepentant Galella. “I want to thank Jackie for suing me,” he went on. “She made me famous.”

While the famous supped on sea bass at the Monkey Bar after party, Galella snapped away soon joined by celebrity photographer Patrick McMullan. At his table sat newly discovered relations, Ottavio Galella and family from Montreal, responsible for a show of his work in the small town in Italy of his ancestry. Ottavio’s wife Marisa nailed it. Ron may have started as a stalker but he became an artist, which may just show a change in the times. As Galella laments a loss of fun, “there are few to photograph now. The new girls, Lindsay Lohan, are bombarded, they expect it and they love it.”