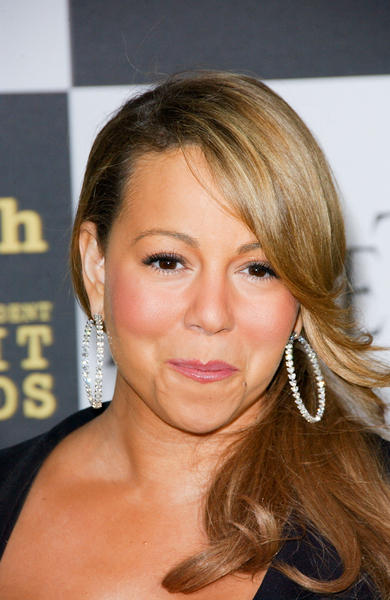 While People, US Weekly, Radar Online and the rest of tabs hound the 40 old year songstress for news of a blessed birth, Carey is busy indeed gestating.

She’s working hard on a Christmas album, with all new versions of her hit, “All I Want for Christmas Is You.” That song is now the most peopular of all holiday songs, downloaded more and played more than even “White Christmas.” So Mariah has smarted up, brought in best pals Jermaine Dupri and Randy Jackson, and they are hard at work getting together their Christmas surprise.

As for the alleged baby–kids, Mariah is not going to tell us anything until the time is right and she’s comfortable with it. A 40 year old woman is not going to announce a pregnancy before the fourth month. If you remember, Jennifer Lopez never did announce she was with child. Her twins are on their way to college now! (Just kidding.)

Anyway, Mariah’s Christmas album is said to be very lush, with lots of strings and no hip hop. A lot of it is said to be “live” and there’s an ochestra. So let’s chew on that news, and calm down about the other. And believe me, she won’t be announcing anything at Radar Online owned by the National Enquirer. That won’t be happening!

And PS: It’s not like Mariah’s sitting at home with her feet up. She’s doing a special gig for Wal Mart tonight outside of Los Angeles.

(photo, like most of our pics, courtesy PR Photos. My caption: “Her lips are sealed.”