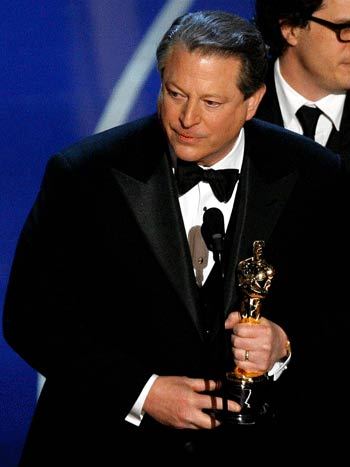 There are many theories why Al and Tipper Gore have separated. Some say it was the strain of losing the 2000 election to Florida chad bandits.

I think it was the Oscar.

Gore won the Academy Award three years ago with director Davis Guggenheim for “An Inconvenient Truth.”

We all know what happens to Oscar winners. Sandra Bullock, Kate Winslet, Julia Roberts, Gwyneth Paltrow, all had relationship disasters after picking up their gold statues. It was bad for Sean Penn, let’s face it, and for Hilary Swank. Roberto Benigni completely vanished after he won his Oscar. Jeff Bridges must be waking up in a cold sweat, hoping his wife of 33 years doesn’t leave him.

And so it is for Al Gore. Not only did the film win the Oscar, but it made a ton of money–unheard of in documentaries. And look what happened to Michael Moore: no divorce, but “Capitalism” was a big flop after he won the Oscar and had a string of successes.

It may be its own inconvenient truth: win an Academy Award and tempt fate. Let this be a lesson.