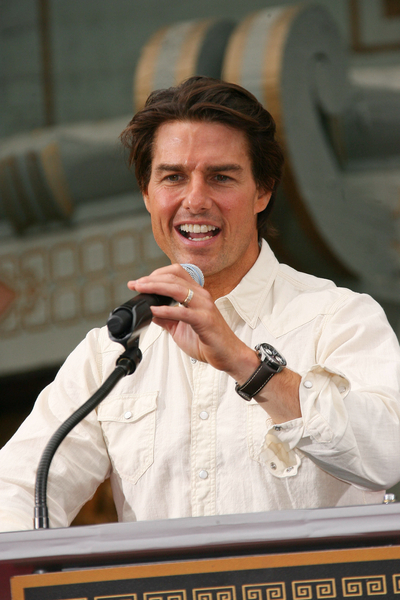 Tom Cruise is back. Well, he obviously wants to come back. So badly it hurts.

A month before James Mangold‘s “Knight and Day,” returns Cruise to the big screen on June 25th, the star’s p.r. machine is purring and humming.

Right now, we’re inundated with Cruise doing promos for the MTV Movie Awards as his “Tropic Thunder” character, Les Grossman. It’s not so funny, but Cruise is milking it. They’ve even combined it with a parody of “Risky Business.” Cruise wants to remind the world that before he jumped on couches, suddenly found Katie Holmes, and made promotional videos for Scientology, he was just a fun guy in Ray Bans and tighty whiteys.

And Tom is on the cover of Esquire, giving minimal answers to softball questions. He’s blaming his deadbeat father for everything. Poor Mr. Mapother cannot defend himself, and no one else will do it. Mr. Mapother as bad dad is an excellent excuse for all of Cruise’s reent nuttiness.

Also in the last weeks, we’ve seen Tom in two “viral” videos–one with Cameron Diaz from “Knight and Day” that’s more staged than a Broadway play. And there’s also Tom’s “impromptu” dance with Katie, the tape of which “leaked” to the web. There will be more leaking of Tom Cruise being “spontaneous” in the next few weeks than leaks on the Titanic.

But this is how it is. In 2005, a terrible episode began in Cruise’s life as he ditched his longtime flack, Pat Kingsley, for his sister. The Katie Holmes business started, followed by the couch jumping and the fight with Matt Lauer on the “Today” show. Then Sumner Redstone ended Tom’s relationship with Paramount. Cruise has gone through several more publicists since then, including a few at Rogers & Cowan and now the gang at 42West.

Cruise’s last two movies were the unwatchable “Lions for Lambs” and the egregious, “Valkyrie.” If you’re 17 this summer, you were 12 when Cruise imploded. Teenagers it can be argued have no attachment to “Risky Business” or “Top Gun” or even “Jerry Maguire.” They just know the YouTube videos of Cruise looking like he’s at a Nazi rally, wildly praising Scientology’s much criticized David Miscavige and someone named “LRH”– L. Ron Hubbard. http://www.youtube.com/watch?v=UFBZ_uAbxS0

If “Knight and Day” is a stiff, then Cruise may be in some trouble. How could it be really bad, though? Mangold makes good movies–“Walk the Line” was terrific. Cameron Diaz seems like gold insurance as the co-star–she can be very funny, and sexy. It’s her second film with Cruise, so they have a rapport. The supporting cast looks great, too– Viola Davis, Peter Saarsgard, Marc Blucas, and Paul Dano are quite a quartet.

Keep this in mind, though: at least eight writers have worked on the “K&D” script not counting Mangold himself and the usual assertion that Cruise did, too. And the movie is more expensive than anything Mangold’s ever done, with lots of locations and exotic fauna which will either add to the madness or be a cover for chaos.

Or, as Tom says in the video link above: “You on board or you’re not on board.”