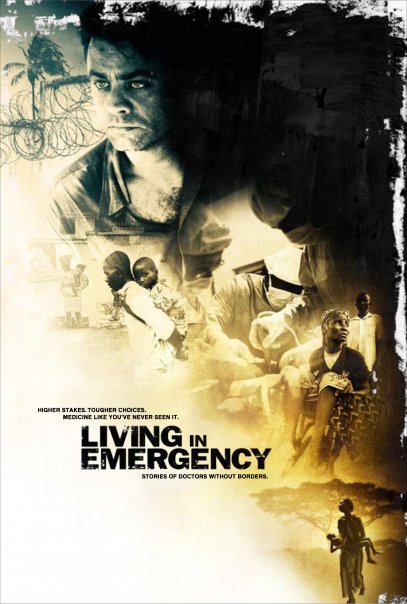 Did you ever wonder what those Doctors Without Borders actually do? Now we know, thanks to director Mark Hopkins.

“Living in Emergency” is Hopkins’ unprecedented documentary about Medecins sans Frontieres, the French group that translates in Doctors without Borders. We finally got a chance to see Hopkins’ work –shortlisted for an Oscar– last night at a private screening, and let me tell you–“ER” at its most vibrant is like “Mary Poppins” compared to this stuff.

Hopkins followed missions to the Congo and to Liberia, where a couple of new doctors and a couple of seasoned ones attempted to be of help saving lives, performing unbelievable surgeries, and seeing patients whose illnesses challenged all normal diagnoses. “Living in Emergency” is not for the faint of heart. Brains are drilled, limbs are removed, and a large intestine is shoved back inside a woman. Blood splatters everywhere. Squalor is a way of life.

At last night’s screening we met two of the doctors in the film, Dr. Arnaud Jeannin, and Dr. Kiara Lepora. It should be noted that Hopkins managed to find the most attractive doctors, both female and male. They could easily be stars of a reality show. NBC would be smart to turn this movie into a series, if they could get these docs to return.

ABut that’s part of the problem. Many of the doctors don’t get past one mission. The work is just too harrowing. Alcoholism and other issues linger. Dr. Jeannin, who should be played by Gerard Butler, has taken a leave of absence after 10 years to work and live in Paris helping his sister launch a cosmetics business. Dr. Lepora (think an Italian Helena Bonham Carter) is doing research in Washington, DC after seven years of saving lives in Africa.(The movie  is very frank, too, about their personal lives. Says Dr. Lepora in the film: “Is there a lot of sex? Yes.”)

Two other docs are featured– Dr. Tom Kreuger, of Tennessee, and Dr. Chris Brasher, who describes himself as “homeless”–he’s sort of a permanent Hawkeye Pierce of Doctors Without Borders. One other doctor is featured, an Australian named Davinder Gill, who is charming and young but cracks under the pressure.

The guests at the screening certainly had a lot to talk about afterward. The eclectic group included actress Mamie Gummer, Dr. Jon LaPook, newcaster Jim Rosenfield and wife Dana Conroy, writer Joan Juliet Buck, Bob Balaban and Lynn Grossman, and media expert Gerry Byrne with his beautiful wife, Liz. The film gets it theatrical release next month. You can read about it at www.livinginemergency.com.