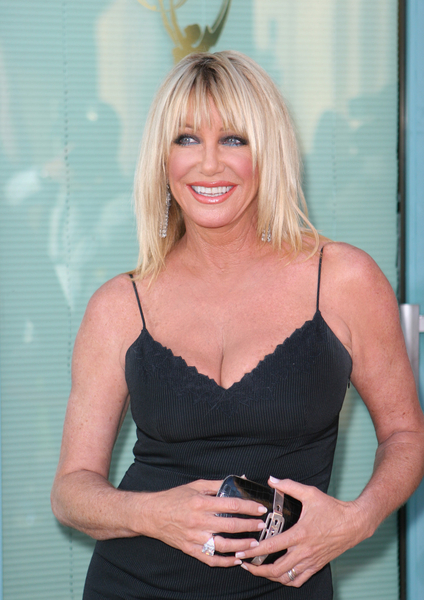 Suzanne Somers — as someone whose weight goes up and down, I have come to agree with a lot of her dieting theories. She’s smarter than you think and still cute as a button.

She’s scored a big coup with “Sex and the City 2.” One of her 19 books on health and nutrition, “Breakthrough: Eight Steps to Wellness,” is heavily featured in the movie that opens on Thursday.  And I do mean, heavily featured. Kim Cattrall‘s Samantha–who announces that she’s “fifty-f-ing-two” and going through menopause–declares that she lives by it. She hands it to everyone in the movie. Forget Oprah. This is a book publisher’s dream. By the end of the movie, women are exchanging copies of “Breakthrough,” with the cover very prominent.

Somers and her husband manager Alan Hamel were at the big “SATC 2” premiere last night; I ran into them at the swell Lincoln Center party with the Arnold Kopelsons. Suzanne told me, “The producers called and asked, Would I mind if they used the book? I said, Sure.” She laughed. (I think this is a true story. I’ve never seen a product plug like this; who knows?)

Somers is a cancer survivor, a recovering everything, and a TV icon from “Three’s Company.” She’s a Hollywood survivor, too. You want to high five her when you see her. “I’m working on my 20th book,” she said. Her books have covered dieting and all kinds of women’s issues. She is often criticized, mostly by doctors, I think, who are jealous of all the ink she gets. But really: you know she’d be one of Samantha’s clients. Bravo!