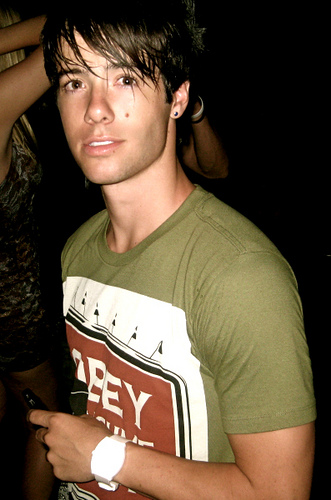 Here’s a name we’re going to get used to, fast: Travis Garland.

The 20 year old singer songwriter is about to get a big push now that’s he’s split from his group NLT.

Garland is now being managed, sources say, by Joe Simpson–father of Jessica and Ashlee. And also co-managed or co-something by gossip blogger and wannabe record mogul Perez Hilton.

The result of all this is that Travis is said to be appearing on “American Idol” possibly on May 18th. Is this really happening? I think so. Why not? Justin Bieber is a pop star, so anything can happen. Plus, Garland seems like he might actually be talented. Plus. Joe Simpson is an interesting guy. He’s made a lot of money with Jessica and Ashlee. When I ran into him in Washington, he was wearing a platinum and diamond men’s bracelet, cufflinks, watch, the whole thing. Tasteful bling. He’s not fooling around.

Joe has been telling people that Travis is the next Justin Timberlake. Again, why not? Justin isn’t doing anything really, and his fanbase is aging. Bieber isn’t going to replace him. So, enter Travis Garland. Let the starmaking machinery begin!