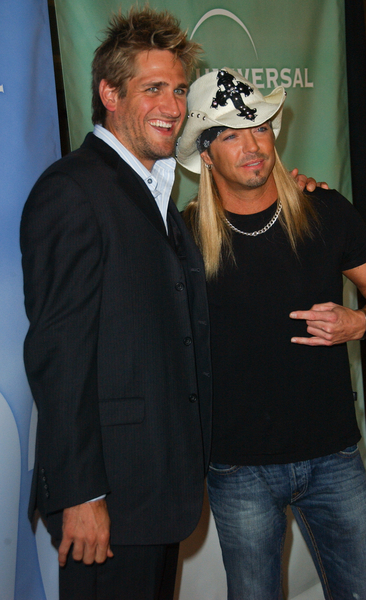 Don’t keep reading if you don’t want to know what I’m told may happen on what has been a hot season of “The Celebrity Apprentice.”

Sources say that Bret Michaels‘ terrible sudden illness–he is in critical condition because of a brain hemorrhage–is a terrible irony, especially if he’s in for a long recovery.

Donald Trump praised Michaels on Friday, calling him “a great competitor and champion.” The wording was the tip off. Champion means victor, not just “great player.” If they had clues like that on “Lost,” the show would have been over two years ago.

Currently, Michaels is one of the two last men remaining on the show. Celebrity chef Curtis Stone is the other.

But I am told that in the end it’s more likely that Stone’s future with Trump is cooked like a Thanksgiving goose. Michaels. they say, is the odds on favorite to be named the men’s winner. That would make him one of the two finalists for “The Celebrity Apprentice.” This shouldn’t come as too much of a surprise; viewers know that Michaels is in the lead.

The shows were pre-taped weeks ago.

“Celebrity Apprentice” is scheduled to air a two hour live episode on Sunday, May 23rd. The last two contestants, one each from the men’s team and the women’s,  have to demonstrate why he or she should be the winner.

Another source admitted, “I know it’s Brett and two others toward the end.”

I do know that on the May 9th installment, there’s a big twist in the women’s story. I won’t say what happens.

While everyone hopes for Michaels’ speedy recovery, it might take a miracle to get him back in front of cameras by May 23rd. And how Michaels’ situation progresses has to be handled delicately by NBC. The Poison rock star’s health is at stake, as well as the show’s future and reputation. But if Michaels can make it to the finale, imagine the drama and the ratings. TV execs would sell their children for such an episode.

People do recover from brain hemorrhages. Gifted pop singer Phoebe Snow had one on January 19th of this year, and fell into a coma. Last week, her manager posted a message on Snow’s website saying she was awake, and making progress. Here’s hoping each of these stars makes a swift recovery.