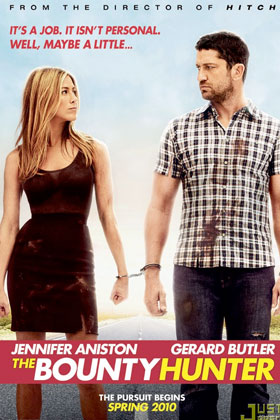 Jennifer Aniston and Gerard Butler are not a romantic couple in real life.

They play one in “The Bounty Hunter.” And the tabloids are dizzy over the idea that they might be in real life. But they’re not. It’s an act, designed to puff up audiences for “The Bounty Hunter” ahead of its opening Friday.

This is the second oldest trick in the Hollywood playbook. Promote a romance between the lead actors in a new movie so you can stoke some publicity. Only Lassie has been exempt from this deception over the years. The tabs and gossips are only too happy to cooperate because it also sells newspapers and magazines.

At last night’s premiere of “The Bounty Hunter,” Aniston and Butler were happy to give the people what they wanted. At Tao nightclub, the pair settled into a remote booth under an overhang. A thick wall of gawkers formed in front of them, snapping pictures on their phones. Some took video. The fight to get to the front of this crowd, and in a position to lean over a velvet rope and yell at or touch one of the actors was dizzying.

“It cost me five bucks to get up here,” I said to Jennifer Aniston after I’d elbowed two people and arrived at what looked like a petting zoo.

“Really?” she asked, caught off guard.

Not really, I replied.

Butler, who is enjoying himself the way any newly minted 40 year old matinee idol would, posed for pictures, put his arm around Jen, and had a ball. This is his year, without a doubt.

Which does he like best, I asked? Comedies, thrillers, action movies? “I can’t watch myself in a comedy,” Butler said. “I wince.” He thought about it a minute: “A thriller.”

The only other famous actor in the room, Cathy Moriarty, of “GoodFellas” and “SoapDish” fame, managed to get through the crowd by hooking herself to a heavyset bodyguard.

A publicist saw me talking to Aniston and got very annoyed. “They’re not talking,” he said, as the din of a crowd of four hundred people raged overhead. “They want to have private time.” He added: “I know you’re going to write about their personal lives.”