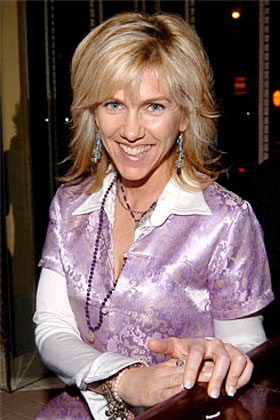 Rielle Hunter fesses up to a lot in her new GQ interview. If Elizabeth Edwards doesn’t die from the cancer, this should kill her.

But there’s a lot Hunter doesn’t tell my old pal Lisa DePaolo, about her life in Hollywood just prior to meeting John Edwards in 2006.

Hunter, I was told a couple of months ago, has a lot of frenemies in the TV business, especially on one still-active network show. If the writers and producers of said show start doing their own fessing up, Hunter may have a lot of explaining to do.

Rielle was married to Kip Hunter, son of the Boulder, Colo., D.A. who handled the Jon Benet Ramsey case. They divorced in 2000. Rielle headed to Hollywood, where she made fast friends.

She wrote and produced a 20-minute comedy called ‘Billy Bob and Them,’ which she also acted in and self-distributed.

George Mooradian, now an Emmy-nominated cinematographer, worked on ‘Billy Bob and Them.’ When he met Rielle, he said, she was just getting or had gotten a divorce.

Mooradian conceded he was paid about $50, if that, to shoot the low-budget film in Hunter’s ‘very nice’ Brentwood home that he supposed she’d gotten in the divorce.

The film, he said, didn’t have much of a plot. ‘It was very New Age-y. It had something to do with altars and temples and crystals.’ The shoot lasted two days.

Mooradian told me: ‘She definitely had some connection to the Dalai Lama and Richard Gere, and there was an offer to meet the Dalai Lama.’ It was after that that Hunter started pitching ideas around Hollywood for various shows. She started a writing project with a producer who introduced her to the set of one particular TV drama. From what I was told, the plot thickened pretty quickly.

In 2006, Hunter — back in New York after her private Hollywood dramas proved too taxing — and producing partner Mimi Hockman needed help to make their John Edwards campaign videos. They brought in Colin Weil, an experienced ad man whose company created AIDS Walk in Los Angeles in 1984 and has a long list of impressive credits. He was introduced to Hockman through a mutual Hollywood friend, Weil told me last year, declining to give a name.

It was Weil’s expertise that actually got the Edwards films made. Weil told me that the filming of the segments occurred from October 2006 to the end of that year. ‘In January [2007] the campaign decided to shelve them. I thought it was a wimpy move. The whole idea was to show Edwards not as a Ken doll — which he looks like — but in a more relaxed setting.’