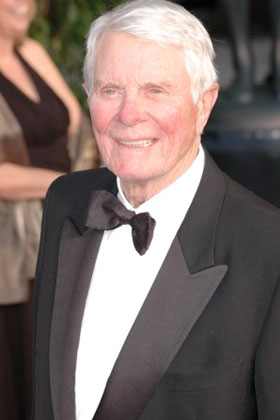 Peter Graves died Sunday at age 83. He was the gray-haired, suave, deep-voiced star of the “Mission: Impossible” TV series on CBS from 1967 to 1973. Graves was also the younger brother of James Arness, who was Marshall Dillon “Gunsmoke” on CBS from 1955 to 1975. They were probably the only siblings ever to star in simultaneous long-running hits on any network. Arness, 87, is still alive.

Graves has loads of credits besides “MI,” but his long-running role as Jim Phelps left an indelible impression. He took over as the show’s lead after married actors Martin Landau and Barbara Bain bolted the series over a contract dispute. Graves stayed until the end and even starred in a reunion series in 1988. Nevertheless, he was never asked to do even a cameo in any of the three big-screen adaptations of the series with Tom Cruise.

My favorite Peter Graves performance: as the stone-faced but hilarious Captain Oveur in “Airplane!” and its sequel. His co-star was Lloyd Bridges, the late father of newly minted Oscar-winner Jeff Bridges. Whatever you do, don’t call either of them Shirley.