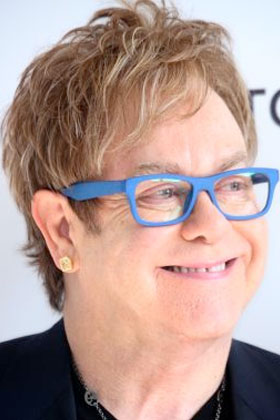 This is a pretty good week for Sir Elton John.

On Monday night, former “American Idol” producer Nigel Lythgoe told me ‘ when I ran into him at the new Beverly Hills Soho House ‘ that he still thinks Sir Elton is the best choice to replace Simon Cowell. “He’s absolutely it,” said Lythgoe, who also said he thinks Ellen DeGeneres is still warming up and has yet to show her full potential. And he misses Paula Abdul. “She was the glue that held it together, wasn’t she?” he said wistfully.

On Sunday night Sir Elton hosted his annual Oscar dinner and party at the Pacific Design Center. Tons of A listers filled up the tents to hear Grace Jones and rub elbows with stars like Betty White, Jamie Foxx, Joaquin Phoenix, Jennifer Hudson, Salma Hayek, Will.i.am, Josh Groban, Malin Akerman, Slash, John Waters, the Osbournes, Hayden Panettiere, Victoria Beckham, Heidi Klum, Alan Cumming, Serena Williams, Nick Jonas, Kara DioGuardi, Simon Cowell ‘‘who was driven around in a $540,000 Rolls Royce Phantom ”Miley Cyrus, and even, as an oddity, Perez Hilton! Grace Jones was wild, outrageous, as good as ever. The party planners created an all red nightclub for her within Elton’s tents. It was quite a treat.

Then, last night: at the Helen Hayes Theater, Elton and David Furnish hosted a pre-opening night on Broadway for a wonderful new play they’ve put their names on as producers, called “Next Fall.” Whoopi Goldberg, Edie Falco, David Schwimmer, Donna Karan and Lorraine Bracco, director Doug Liman, and Oscar winning “Amadeus” director Milos Forman were in the audience to see this very funny and moving dramedy by Geoffrey Nauffts. Patrick Breen and Maddie Corman are standouts in this story of love and loss, but everyone in the cast is spot on ‘ especially Cotter Smith as a redneck dad who might be hipper than we think. Among Nauffts’ many laughs are several thought provoking conversations about religion and sex and death. Bravo to Elton and David for giving this play a leg up!

So that’s Sunday, Monday, and Wednesday. “Next Fall” has its real opening tonight, with more accolades. What will Elton do on Friday? Sleep?