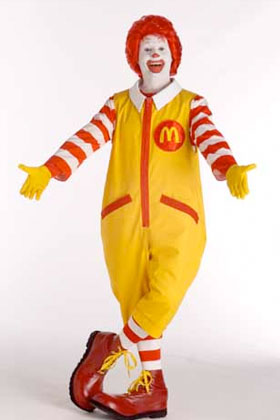 Ronald McDonald kills the Michelin Man in a short film that won an Oscar on Sunday night for Best Animated Short film.

“Logorama” played at Sundance, but it unlikely to be seen’in many theaters. It possibly runs afoul of at least a thousand trademark violations by lampooning logos of well known companies from McDonalds to Michelin to Starbucks, Apple, Nickelodeon, and so on.

The film, made by Francois Alaux, Herve de Crecy and Ludovic Houplain,won Best Short at the Stockholm Festival and the Kodak award at Cannes. But no one in America saw it until its Sundance screening and a few museum showings. Sacre bleu!

“Logorama” is a satire about branding, I guess. It’s animated, and propels Ronald and the Michelin Man, as well the kids from Haribo Candy, and the mustachoied Pringles man (voiced by director David Fincher of all people)’and many other well known brand characters into a bizarre story that is literally chock full of logos and a little violence. You might think it’s a product plug, but this is the antithesis of that. You have to give the animators credit: they’ve found just about every logo they could think of, even Atlantic Records. Dunkin Donuts is in there, as well as Avis, MGM and Best Western. You can get a taste of it at http://www.boingboing.net/2009/09/15/logorama-animated-ci.html.

“Logorama” is incredibly inventive. It reminded me of old cartoons from the 1950s that took regular swipes at topical subjects. Maybe the companies involved will have’a sense of humor and let it go. The Oscar should help. We can only hope.