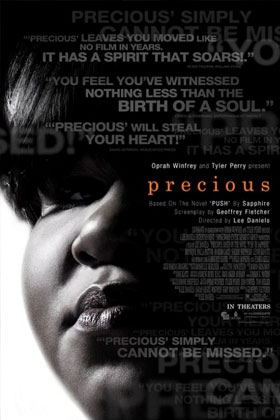 All the awards and nominations bestowed on Lee Daniels‘ movie, “Precious,” should shame the already shameful National Board of Review.

The NBR, a fan-based, fee-paying group, snubbed “Precious” this year. It was not named as the one of the group’s Best Films of the year. The only citation it received was a throwaway nod to Gabby Sidibe as Breakthrough Performer. The NBR was pretty much the only group in the world that didn’t give its Best Supporting Actress award to Mo’Nique.

The real and utter embarrassment for the NBR though comes with the Oscar awarded to Geoffrey Fletcher, who adapted Sapphire’s novel “Push.” Fletcher won the Oscar for Best Adapted Screenplay. He was ignored by the NBR after resigning from the group last year. His reasoning? He thought it would be a conflict of interest if he stayed. Of course, Fletcher was a fee paying member. Maybe the NBR didn’t like losing his $600 a year.

But in fact the NBR is neither. It’s a group of well-to-do New Yorkers who pay $600 to belong and see screenings, and $600 more to attend a gala in January and have their pictures taken with the stars. It’s run by a kabal headed by Annie Schulhof, a society matron who once had aspirations to produce movies. The group’s only real critic, Annette Insdorf, a respected writer and teacher at Columbia University, was ousted a couple of years ago.

The “Precious” scandal echoed another from a couple of years ago. The NBR also passed on “Dreamgirls.” They gave Jennifer Hudson, who wound up winning the Oscar, that same Breakhrough Performer award they tagged on Sidibe. Why the studios take this group seriously any more is a mystery. But after this episode, they’d be right to insist on changes or simply let the NBR drift into deserved obscurity.