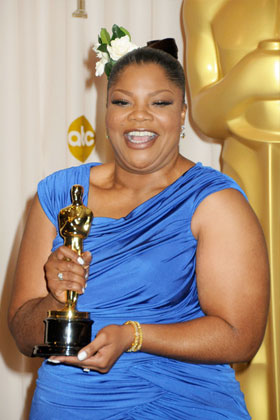 Monique Imes calls herself Mo’Nique, which sort of translates to the clumsy “more unique.”

Tonight she will be the first winner of the Academy Award to have an apostrophe in her name. That’s more unique than almost anything else.

She may also be the first winner to bring her husband up on the stage. At the Independent Spirit Awards on Friday night, Mo’Nique’s husband of four years, Sidney Hicks, walked her right up to the stage and almost up on it.

It’s hard to say whether or not Mo’Nique is shy, arrogant, or a combination of both. When a stranger approached her at the awards with a hand outstretched to shake, she said. “This is my husband.” After Hicks had cleared the stranger for conversation, the actress felt free to chat briefly. Tonight’s red carpet will be a long walk if that’s the approach taken.

At her Spirit Awards table, Mo’Nique was a portrait in reserve. It’s possible she’s anxious, although at this point she’s won every award possible. When her name was called there was no look of relief or happiness. She is able to hide whatever emotion is guiding her and remain stone-faced.

There are those who have surmised that her “Precious” run will be a one-time thing for Mo’Nique. After all, her role as Mary, Precious’ violent mother, is larger than life. The key moment comes at the very end of the film, during Mary’s meeting with Precious and Mrs. Weiss, the social worker played so beautifully by Mariah Carey.

Mo’Nique could travel the road of former winner Cuba Gooding Jr., who made “Show me the money!” a catchphrase in “Jerry Maguire” 14 years ago and then has traveled an odd career path. It’s true that there aren’t many roles for women of her age or color, so Mo’Nique will have to develop material if she wants to stay in the game. The odds are she’ll do it — she’s smart and tough, and loaded with potential. And she has that apostrophe, which makes her more special than most.