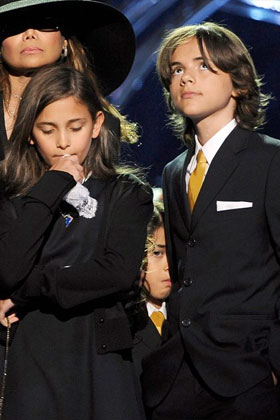 It’s no surprise to some insiders that Michael Jackson’s kids are being investigated by the Los Angeles Department of Family Services.

Remember the YouTube video I showed you a couple months ago? It showed the Jackson kids romping around a luxurious suite at the Palms Hotel in Las Vegas on Thanksgiving.

Sources tell me that this latest adventure at Katherine Jackson’s Encino home is no surprise. Mrs. Jackson’s lawyer, Adam Streisand, has issued several denials. But TMZ reported that Jermaine Jackson’s son, 13-year-old Jaafar, ordered a pair of stun guns online. One of the guns may have been used on Blanket, Prince Michael II, and Prince, aka Michael Jackson Jr.

What I’m told is that Michael’s kids have little to no supervision. Nanny Grace Rwaramba is not living at the Hayvenhurst Avenue home, but making occasional appearances. Katherine Jackson, who’s 80, is simply not up to the task of watching all the kids who’ve been dumped in her home.

“Randy Jackson and Jermaine Jackson’s kids are running wild in the house,” says a source.

Indeed, Michael’s kids are now photographed with bodyguards or cousins their own age. But they are suffering, my sources say, from not having any parental figure.

Over Christmas and New Year’s, the kids spent the holiday with a New Jersey family whom Michael befriended years ago. That family has been the closest thing to normal for the Jackson kids.

“Paris especially needs a mother figure,” says a source. Many thought that Janet Jackson or her sister Rebbie would step up and take responsibilty for the kids. But so far that hasn’t happened. Janet, they say, is busy with her career. Rebbie has her own family. And with no Jacksons but Katherine left anything in Michael’s will, it’s unlikely that anyone in the extended family has an interest in dealing with Michael’s kids.