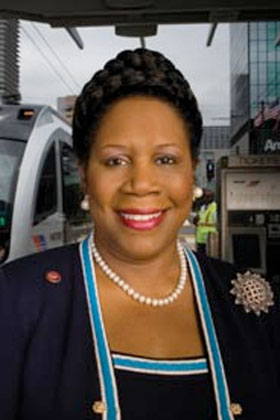 In Texas there’s a fierce battle over a Congressional primary being held this Tuesday. And pop radio seems to be the issue.

Democrat Sheila Jackson-Lee, who’s been a great and vocal member of’ Congress since 1994, has done a lot of good things during her run in Washington. One of the best things is her fight to help recording artists get paid by radio stations. She’s one of the supporters of the important Performance Rights Act (HR 848).

But Lee’s support has made her a target from a couple of special interest groups. I’m told that the National Association of Broadcasters — the lobbying group that represents the wealthy radio monopolies — as well as Radio One, a 52-station network of black radio stations — has been piling on Lee to knock her out of office. There’s a primary vote in Texas on Tuesday, March 2.

In particular, Radio One’s Cathy Hughes, sources say, has been using her Houston station to dump on Lee and support her opponent. Hughes is terrified of the Performance Rights Act because if it passed, she’d have to contribute to a pool that actually paid musicians for being paid on the radio. Hughes actually has a web page where she sings out of key and misstates facts about the Bill.

Down in Texas, Cathy Hughes – who lives in Washington, D.C., and is wealthier than most of the musicians who get played on her stations — has used J.R. Ewing-like methods against Sheila Jackson-Lee, sources say. “She’s pounding Lee,” says a Texas radio listener, on the three local Radio One Houston stations and two more in Dallas.

Since the dawn of rock ‘n’ roll in the ’50s, radio has had to pay only the writers of songs they play. But the actual singers and musicians have received nothing. This is particularly daunting for performers who didn’t write their songs. That includes everyone from Frank Sinatra, Tony Bennett and Barbra Streisand to Whitney Houston, Linda Ronstadt and Judy Collins.

Take the latter case: Collins sang and popularized Joni Mitchell’s “Both Sides Now.” But only Mitchell gets paid when Collins’ record is played on the radio. It’s been 40 years since the record sold copies. But it’s played every day, somewhere. Collins’ only option to make money from it is to go out and do concerts.

Radio One and the NAB oppose this. They think Judy Collins should be out concertizing til she’s 90.

And the NAB is serious about trying to kill the Performance Rights Act. This month, for example, the lobbying group ran 60 commercial spots in one week — over just seven days — on WTOP in Washington, D.C. (not a Radio One station), against the Performance Rights Act. And guess what? There was no charge from WTOP even though the ads were worth over $100,000. They were free.