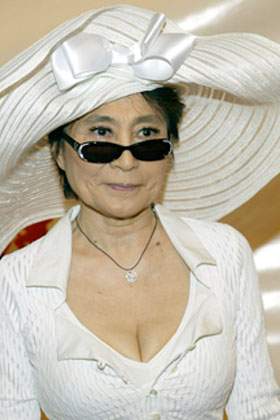 A follow-up to Monday’s item about Yoko Ono. While her Spirit Foundation doesn’t give money to Amnesty International, the group still loves her. Turns out she’s been giving them free rights to John Lennon’s music for years, and has been a huge supporter of the organization.

I don’t mind adding that info to the earlier story. If Amnesty loves Yoko, so does Showbiz411. In particular, a website called www.instantkarma.org is set up just to document how much Ono has done for Darfur via AI.

On the site you can download and purchase twenty different covers of post-Beatle Lennon tracks by a variety of stars from U2 to a duet by Dhani Harrison and Jakob Dylan on “Gimme Some.”

There are no actual Dylan recordings, but these are sufficient. An Ono/AI intermediary also says Ono has given the group “Imagine” to promote its cause. The group says she helped raise $4.5 million.

This doesn’t explain everything about the Spirit Foundation, but as Lennon said, Give peace a chance.