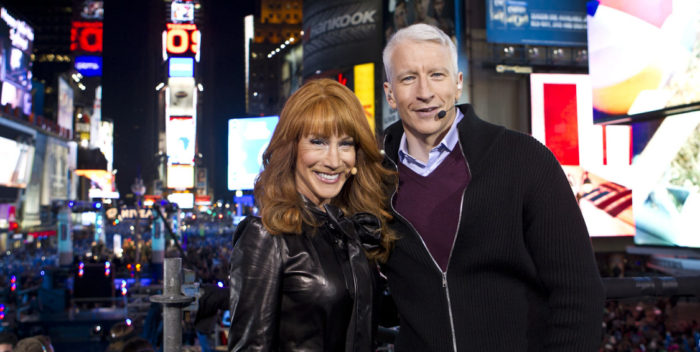 Anderson Cooper then threw Griffin, his friend, under the bus with this Tweet:

For the record, I am appalled by the photo shoot Kathy Griffin took part in. It is clearly disgusting and completely inappropriate.

Lesson learned: In the media, no one is your friend. Cooper could have just kept his Tweet shut. Yes, Griffin was wrong, and what she did showed no judgement no matter how much you dislike Donald Trump. But the piling on is just way too much. Shall we stone her, a la Shirley Jackson’s “The Lottery”?

Certainly Donald Trump’s crimes against humanity outweigh what she’s done here. He’s taken to Twitter to say his son is upset. But on his personal Twitter account– which has a larger following than his @POTUS– Trump has yet to express dismay or condolences for the two brave men killed in Portland for fighting a racist. Is son Barron upset about that? I doubt it.

Griffin has apologized (see below). Has Trump apologized for making fun of a handicapped journalist?

I am sorry. I went too far. I was wrong. pic.twitter.com/LBKvqf9xFB