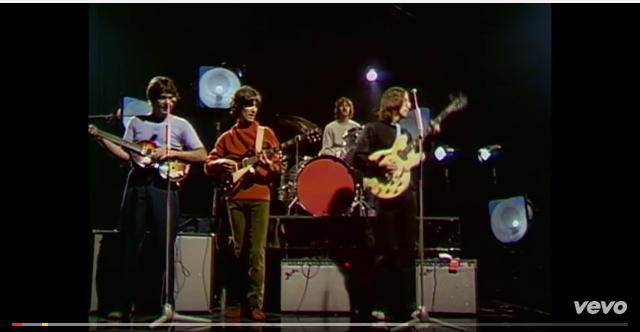 Here’s “Revolution” as you’ve never heard it, remixed and remastered with a video unseen until now.Just listen: if all of the new “1 + 1” album sounds like this — amazing. Giles Martin has done an outstanding job. The album hits us November 6th. Get really good headphones for this release– Grado, Sennheiser, AKG, Master and Dynamic– no Beats– or try to listen on a real stereo, not a compressed iTouch or phone.

from the press notes:
Directed by Michael Lindsay-Hogg, and filmed on the 4th September 1968 at Twickenham Film Studios. Restored and remixed for The Beatles 1 Video Collection, which is available for pre-order at thebeatles.com.

“Plugging directly into the Abbey Road desk and pushing the needles into the red achieved the fuzz-guitar sound. According to George Martin “We got into distortion on that, which we had a lot of complaints from the technical people about. But that was the idea: it was John’s song and the idea was to push it right to the limit. Well, we went to the limit and beyond.”