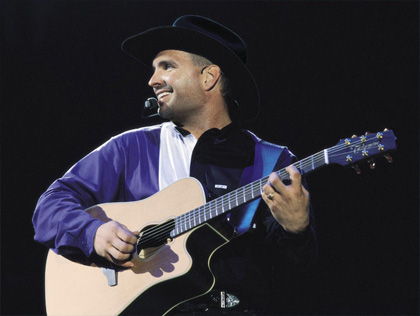 Garth Brooks is back! The country superstar will release his first new album in years– literally eons– around the second Tuesday in November. That will be 13 years since his last new collection, Scarecrow, which went platinum five times.

The other big news is that Garth’s entire catalog will be available for downloading starting on Monday at his website, www.garthbrooks.com. Garth had previously been one of the few remaining holdouts, refusing to allow his songs on iTunes, amazon, or other services.

Now he’s going do it himself and cut out the middle man. I don’t know why more artists don’t do it this way.

A countdown clock is already running on the site. I hope they can handle the deluge when the downloading begins on Monday. Brooks is the biggest country star, and in the top 10 of all music stars.

As his fans know, Garth took a break from recording and touring to be with his wife, Trisha Yearwood, and his kids. And he really meant it. When I ran into him three years ago, Garth old me: “I’m not putting a new album out until all the babies are out [of the house]. I’m going to raise them and then hit it with a vengeance. We’ve got another three or four years.”

Well, that time is here. Garth will also launch a tour following release of the album. He said this week that he was already talking to Ticketmaster, which means in the concert biz that he’ll likely be promoted by Live Nation.

It’s not like Garth hasn’t been around. His multi-CD set, released on his own label last year, sold almost a million copies. The new album will be on his own label again, Pearl Records, via Sony’s RCA Nashville. That has to be a blow to Universal Music, which now owns Capitol, Garth’s old label. But Brooks took control of his catalog a few years ago. Even if Sony is just distributing Pearl, it will bring them a lot of good will and attention.

ROCKIN’ TO SAVE BABIES:  Circle July 23rd for a big charity fundraiser at The Hammerstein Ballroom in NYC. A Great Big World, Mary Lambert (of Macklemore fame), DJ Cassidy, Ryan Star and Hannah Bronfman are among the acts raising money for the rbabyfoundation.org. Z100 is sponsoring the event which will raise money for Emergency Pediatric Care. Check out their website. Macklemore fans– wait til you see and hear Mary Lambert live!