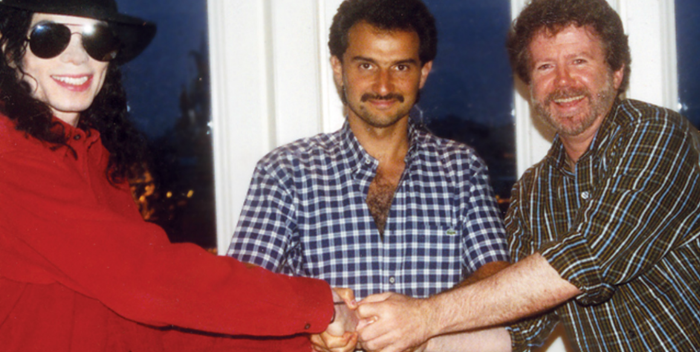 EXCLUSIVE I know. You’re thinking: Is this possible? But in the mid 90s Michael Jackson went into business with Gary Goddard, now one of the defendants announced today in the so-called “X Men” pedophile cases. The business was Landmark Entertainment, and it was designed to build theme parks. Jackson, Goddard, and Prince Alwaleed of Saudi Arabia were all partners in it.

Goddard has a picture of himself, Jackson and the Prince in a three way handshake at the time of the consummation of their deals.

This was during a time also in the mid 1990s when the Prince and his main aide, Tarak Ben Ammar, were managing Michael’s career. It’s the same time, coincidentally, when Goddard, then working with the Prince and Michael Jackson, is accused of allegedly being involved in parties with underage boys.

At that time, Jackson was in a kind of career limbo, between his scandals and the 2001 release of “Invincible.” He was also going broke quickly and hoping the Prince would bail him out. Kingdom Entertainment–an outgrowth of the Prince’s Landmark Entertainment– was supposed to do that but it didn’t.

Soon after all this, Michael’s best friend and adviser became Marc Schaffel, a producer of gay pornography.

Simply by coincidence, Michael Jackson was arrested for, and acquitted of, child molestation a few years later. Rumors even in the mid 90s of Jackson’s problems with boys never fazed Prince Alwaleed.

Now Goddard– who according to his website is still in business with Prince Alwaleed– is accused by Michael Egan III of plying him with drugs and participating in sex parties, even though Egan was about 14 or 15. The events are alleged to have taken place in the homes of a convicted child molester.

Here’s a video well worth watching of Jackson, et al: