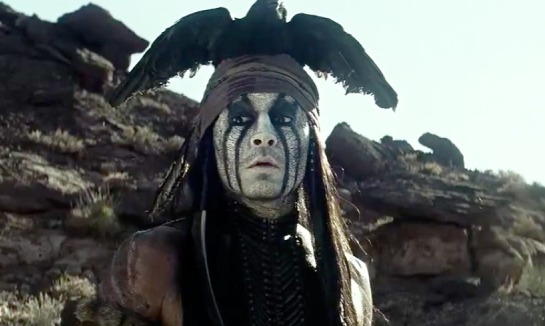 Hi ho and away we go. Is “The Lone Ranger” going to be Disney’s “John Carter” of summer 2013? Yikes. Breaking the review embargo, both Variety and The Hollywood Reporter savage the $200 million plus blockbuster starring Johnny Depp and Armie Hammer, directed by Gore Verbinski.

Variety: “…this over-the-top oater delivers all the energy and spectacle audiences have come to expect from a Jerry Bruckheimer production, but sucks out the fun in the process, ensuring sizable returns but denying the novelty value required to support an equivalent franchise…”

That’s not all. Variety also has a lot of criticism for Depp and for Hammer. On Depp:  “With his bone-white face separated by four vertical black streaks, Tonto certainly looks distinctive, though his very appearance is what disguises the inherently Depp-like appeal of the character. Whether offering birdseed to his crow-hat or conning gullible white men into unfair trades (an amusing reversal on history), the actor’s bow-legged, pidgin-speaking Tonto needs more dynamism to register through all that makeup.”

Hammer is described as a “vanilla protag[onist].”

The Hollywood Reporter says Depp “looks like a mummified Christopher Walken.” And it gets worse from there.  Todd McCarthy calls “The Lone Ranger” a work that wobbles and thrashes all over the place as it attempts to find the right groove.” Both reviews suggest that a sequel is unnecessary.

This hasn’t been a good summer for tentpole movies. While “Man of Steel” has made money, it’s gotten poor reviews. Both “After Earth” and “White House Down” are duds. Early release “Jack and the Beanstalk” was brutally forgotten. It does seem like Steven Spielberg and George Lucas’s recent dire predictions are coming true about these $200 million colossuses.

“The Lone Ranger” screens tonight for most media. Here’s hoping the trades were overly critical. But it’s already scoring very low with critics and bloggers– 25%– on RottenTomatoes.