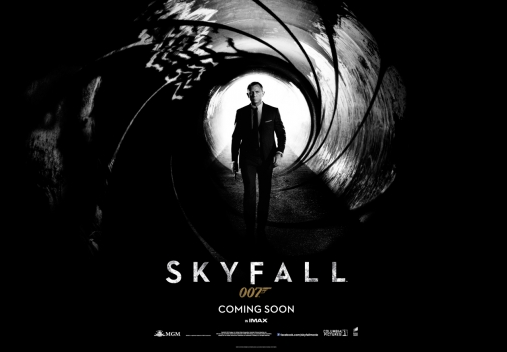 Exclusive: Adele’s theme song for the new James Bond film, “Skyfall,” written by Adele and a collaborator (probably Paul Epworth), is classic 007 in the manner of the best Bond songs of the past. It’s an ominous, dramatic ballad, with lots of gorgeous horn flourishes peeking out through Adele’s now trademark vocals. It’s also fresh, new, and original.

Thanks to record industry sources, I got to hear a bit of the song. Readers of this column know we already broke the story of Adele singing the “Skyfall” theme a couple of times.

Part of the chorus of the song goes: “Let the sky fall/Let it crumble/We will stand tall/And face it all/together.”

The introductory lines, which follow a piano solo, are: “This is the end/Hold your breath and count to ten/Feel the Earth move and then/Hear my heart burst again.”

Adele and Sony Music are set to launch the single during the first week of October. It’s the singer’s first new song since her “21” album debuted in January 2010. It’s unknown still how Sony will package “Let the Sky Fall” as a one off single since I don’t think Adele has recorded anything else to go with it. There is a “Skyfall” soundtrack score album scheduled from Sony for release on November 6th, but no information is available about tracks.

My sense, though, is that the single will hit #1 everywhere and pretty fast, and stay atop the charts for several weeks. It recalls the best kind of Bond hits by female vocalists like Carly Simon, Shirley Bassey, Tina Turner, Sheena Easton, and Rita Coolidge. Unlike more recent failed efforts by Madonna, and by Alicia Keys and  Jack White, the song is tremendously catchy with a real sense of mystery.

One good thing: we’ll have Adele singing “Skyfall” at the Oscars next February. It’s a cinch for a Best Song nomination.