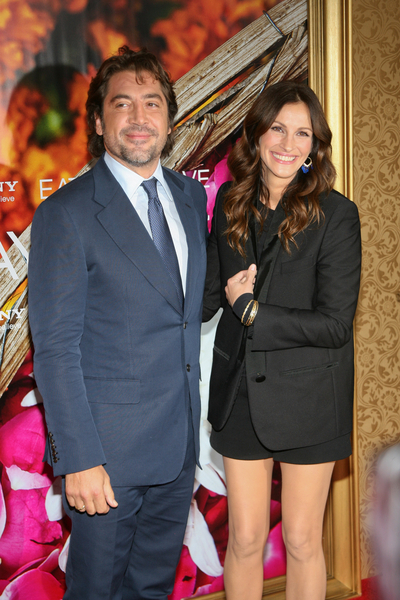 Julia Roberts went on a spiritual journey for the movie,”Eat Pray Love.” The journey ended at the swanky Metropolitan Club on Fifth Avenue last night where Columbia Pictures threw an invite only lavish after party for Roberts, director Ryan Murphy, the cast and miscellaneous celebrities.

And what did Julia learn from finding herself and communing with swami’s and gurus? While the guests partied downstairs in the famous club, Roberts threw herself a private gathering upstairs, in a room blocked by bodyguards. She took the whole cast hostage, as well as Julian Schnabel, Josh Brolin (who brought his 16 year old stepdaughter Eleanor–Diane Lane‘s daughter with Christopher Lambert), and Eddie Vedder of Pearl Jam.

It was quite a scene watching various people trying to get past the guards and into the room. Former New York Times movie reviewer Elvis Mitchell was turned away, but eventually gained entry. Two young women had to send someone in to find actor co-star Billy Crudup, who finally came out to say hello. The movie’s main producer left his family outside the party and kept running in and out to be with them.

The most glaring snub: Elizabeth Gilbert, the best selling author of “Eat Pray Love” was left way downstairs and far away from Roberts’ soiree, with her own guests.

Roberts did spend about five minutes in the main party room. But as she and her posse–including husband Danny Moder–were hurried out and away from the dreadful real people, Roberts said, to no one in particular, “That’s so tacky.” A lot of the real people heard her say it.

Vedder and Brolin hung out l0ngest in the main room, and each were funny and polite. Bardem and Schnabel would have stuck around longer, but they were summoned by publicists who arrived with Roberts’ invitation. Gilbert was totally excluded.

I tried in vain to find Jennifer Salt, daughter of the late legendary screenwriter Waldo Salt. Jennifer, who once starred on “Soap” as  Eunice Tate, is herself a fine scripter who faithfully adapted “Eat Pray Love” from Gilbert’s memoir.

But I did run into director Ryan Murphy, now famous for TV shows “Glee” and “Nip/Tuck.” Ryan used to write for me in the 1980s at Fame magazine, and wrote a column for US Weekly. He authored the famous Entertainment Weekly interview with Alec Baldwin in which Baldwin called Jeffrey Katzenberg “the eighth dwarf.” http://www.ew.com/ew/article/0,,314345,00.html His Hollywood ascent is a great success story!

The only members of the “Eat Pray Love” gang not in attendance were Viola Davis and James Franco.

There was a heavy turnout from CAA for Roberts and Murphy–both Kevin Huvane and Richard Lovett.

Sony/Columbia is counting on the “Eat Love Pray” readers turning out at the box office. The studio is on the upswing right now with Will Ferrell’s big hit “The Other Guys” and “Salt,” “Grown Ups,” and “The Karate Kid.” It’s been a hell of a year so far.

But “EPL” definitely cost a lot. With Roberts’ salary and the locations in Italy, Bali, and India, this is a $100 million movie. Gilbert told me she loved the adaptation. It’s more than likely that the book’s readers will, too.

The movie does suffer–at least for men–from a lack of purpose. When men want to “find themselves” we use GPS. Women may identify with Gilbert’s journey, which looks like it cost a million dollars. She suddenly has no interest in being married to her husband, played by Billy Crudup. So she ups and leaves. He’s not cheating on her or abusing her. He’s perfectly nice. But she dumps him, then traipses around the world complaining about it all. She doesn’t become altruistic, or charitable, or politically active. But she always looks great.

I really got a kick out of Julia Roberts on “Letterman” recently. She was charming. And often in “EPL” that charm comes through. But just as often Roberts seems to be fighting the demons of “Liz Gilbert” (as written, not the real person). Women may want to see that on screen,and join her on that trip. This is a movie we will be seeing on Lifetime, OWN or We for decades to come.

PS We’ve been at parties at the Metropolitan Club honoring Meryl Streep, Clint Eastwood, Diane Keaton, Jude Law, Robert Downey Jr--dozens of A list celebrities. This was the first time ever that a private party was given upstairs and the stars were isolated. Mark it down in your books. A first.