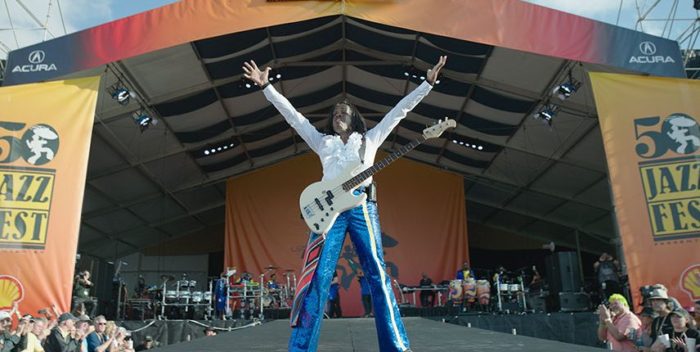 “JAZZ FEST: A New Orleans Story,” is an exuberant, boisterous bursting out of its seams documentary. The doc overflows with genuine affection for the cultural treasure that is the music of New Orleans.

Directors Frank Marshall and Ryan Suffern make perfect use of the footage from the storied New Orleans Jazz & Heritage Festival, both archival and shot at the fest’s 50th anniversary in 2019. The performances and off-stage antics are a treat to watch. The interviews of the colorful characters that inhabit this annual festival shows why this fest draws world-wide devotees.

The film is wonderfully relentless in showing off the talent of the fest; from the home-grown Marsalis family to Katy Perry, Pitbull, Aaron Neville, Verdine White and Earth, Wind & Fire, Herbie Hancock, Al Green, Tom Jones and more. New Orleans’s resident Jimmy Buffet is one of the Fest’s most rabid champions. Buffet so loves his city and it shows making his stories particularly poignant.

The doc delves deep to the differences between Zydeco and Cajun music along with the myriad other forms of music that make up the Jambalaya (yes the famed food is mouth-wateringly shown too) of the singular New Orleans Jazz. Not to say that it’s all pink paint and roses. Hurricane Katrina’s devastation is a featured player as well. Bruce Springsteen is shown performing “My City in Ruins.” The Boss originally wrote that for his down and out town of Asbury Park, NJ. It became a post 9/11 anthem then sadly a fit for post Katrina.

Bottom line though is that this film is a love letter to the people of New Orleans and a music lovers dream. Kudos to the cinematography, it’s truly terrific. Marshall and Suffern are unabashed fans; they tell the story with over-the-top respect and affection. A doc that is a must see in these times when if you can’t be there, at least you can escape to the irresistible celebratory charm of “JAZZ FEST: A New Orleans Story.” You might want to hop on a plane and visit The Big Easy yourself!