The greatest living composer of Broadway shows, Stephen Sondheim, has died at age 91. The tributes will be pouring in from everywhere all night. Most awarded, most sung, most loved even as a curmudgeon, Sondheim’s music permeates our culture in the way that few composers in history have left a legacy. 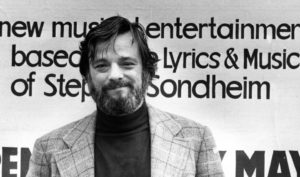 Sondheim leaves us as one of his landmark shows, “Company,” is about to take Broadway by storm again in a revival. His other shows stretch from “West Side Story” to “Sweeney Todd” to “Into the Woods,” “Follies,” “Sunday in the Park with George,”: and so on. The songs are legendary, especially “Send in the Clowns” to “Somewhere” and everything in between.

I knew Sondheim a little, some from the time leading up to making “Sweeney Todd,” my favorite musical of all time, into a movie, through his close relationship with the legendary filmmaker DA Pennebaker when the director recorded for history the making of the “Company” score with Elaine Stritch. A couple of years ago, when “Sweeney Todd” was being performed downtown at the Barrow Theater turned into a bake shop, I had the good fortune to sit behind him and Bernadette Peters. It was a thrilling night.

Sondheim’s influence on musical theater and performers and the entire landscape of Broadway has filled and will fill books forever.

The lights on Broadway should be dimmed for a week. Here’s the official Times obit.