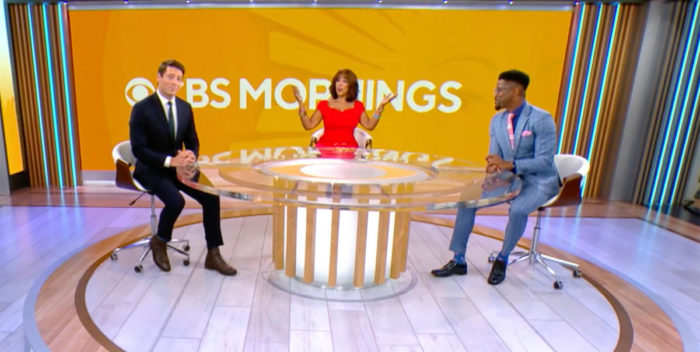 A year ago, “CBS This Morning” averaged 2.745 million viewers in this week in September.

“CBS Mornings” moved the show to Times Square, and dropped news man Anthony Mason from the anchor desk, exchanging him for former NFL player Nate Burleson. The new heads of CBS News were going to “hip up” the show. Instead, they’ve alienated their viewership.

The pursuit of the “CBS Sunday Morning” audience has gone awry. The new daily show stole the Sunday show’s theme music, but dropped the anchor who was identified with both shows. Mason is too polite to complain, so I’m doing it for him. Not that Burleson probably isn’t a lovely chap, but he doesn’t have Mason’s 35 year expertise and taste.

So what now? All news ratings are down from last year at this time, but the “CBS Mornings” numbers are of interest because they made the biggest changes. Meanwhile, Norah O’Donnell’s evening news has also lost 14% since a year ago, dumping their Executive Producer over the summer.

CBS isn’t feeling the pain of not having election news to propel ratings. The number 1 show, David Muir’s ABC Nightly News, has suffered, too. Last week they averaged 7.867 million viewers. A year ago, 8.938 million.