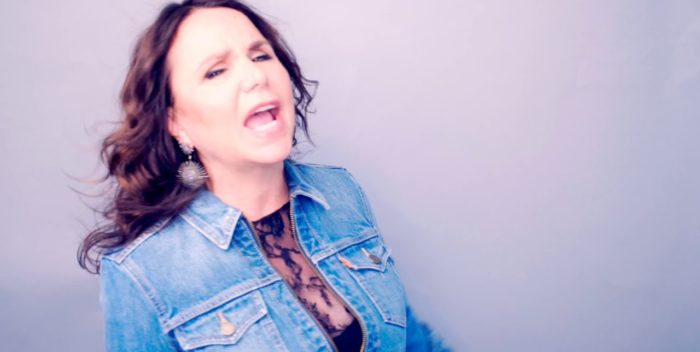 Let me catch you up a little bit about Patti Smyth, as opposed to Patti Smith.

Patti Smyth is married to John McEnroe. She’s that one. She has six kids in a blended family. In 1984, Patti headed up the group Scandal, and she was a fierce rocker. With Scandal she had a smash hit called “The Warrior.” She had two solo albums in 1987 and 1992, but then life caught up with her– all those kids– and she was backburnered as a rocker and front burnered as a mom.

Now, 18 years after that third solo album (there was also a Christmas album in there), Patti is back. Her album is coming in September and it’s called “It’s About Time.” I’m going to call it, It’s about effing time. Every time I see Patti I ask her to make a record. She is a wildly good singer and guitar player. She’s a Rock Star. Hey, her first husband was even Richard Hell.

So now we have the first single, and it’s called “Drive” and I love it. The only problem is she signed with BMG Records, which just self destructed on the Pretenders’ new album, “Hate For Sale.” Brilliant record, but zero marketing or publicity. “Hate for Sale” sold 2,500 copies is DOA. Will BMG do that to Patti? Yeah, probably.

You know when I wrote to BMG to ask for a review link for the Pretenders record, the PR department denied it was their release, cc’d a bunch of people and never got back in touch. I couldn’t have been alone. Hence, 2,500 copies.

So Patti should hire an outside firm now. And just forget about BMG. And if you love women rockers, download her music. And the Pretenders.

In the meantime, “Drive” is damn good.