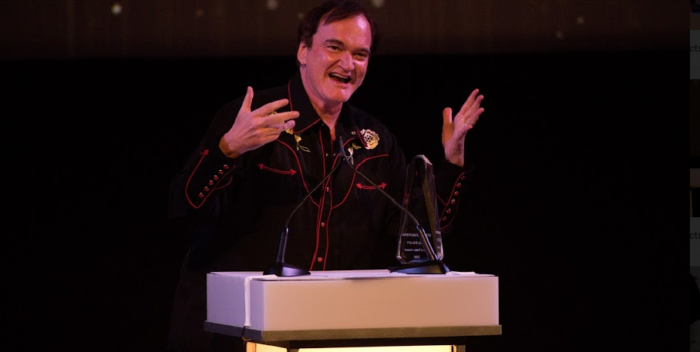 Once Upon A Time …at Tuesday  night’s “Final Draft” Awards on the Paramount lot, Quentin Tarantino reigned supreme. He was presented with the Final Draft Hall of Fame Award, which was given to him by one of his biggest screenwriting inspirations, the legendary filmmaker Walter Hill. The two titans were in good company as they were surrounded by the literary elite, all there to honor Hollywood’s written word.

Final Draft is the industry’s gold standard screen writing software. Steven Canals, co-creator of “Pose” was given the New Voice Award for TV. Funny brothers Randy and Jason Sklar were the evening’s emcees, along with Final Draft President Scott McMenamin.

“Parasite” director Bong Joon Ho was there to give the New Voice award to “The Farewell’s” Lulu Wang. He told me that Tarantino’s film was “absolutely charismatic.” Quentin had this to say to the crowd: “I do believe screenplays are meant to be read. Maybe in my case to a fault. It’s all about the emotional experience that you have reading the script, and that you get caught up in it and you see the movie.” 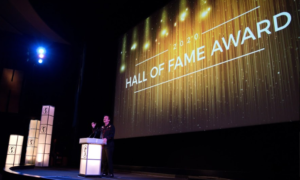 Quentin went on to describe one of his first screenwriting attempts. “I tried to write my version of “Paradise Alley” about these three Italian brothers in the 30’s in New York and it was called “Brooklyn BR.” Like “Reservoir Dogs” ‘BR’ doesn’t stand for shit, it just sounded good! I think I got to page 35 on that one.” He then spoke to screenwriters specifically and told them what some studio executives he had just met with conveyed to him. “They told me something that I didn’t quite know. It’s kind of one of those golden secrets on the studio side of the gates that I think you writers should know…That writers now want to get into the writers room of a TV show. That’s the big thing to do. But these executives are looking for those spec scripts and people aren’t writing them. People are trying to get jobs. But before we got jobs we poured our hearts and souls into these cockamamie masterpieces.”

Tarantino expounded on his subject.  “I’m just telling you, if you were to go into your bedroom and lock the door and three months later come out with a screenplay, I’ve heard from big people they are waiting to read them. They want to read that diamond bullet script from that person they never heard of before that they can say is their own…I think that’s what they call an opportunity in the marketplace and I want to pass it on to ya’l!”