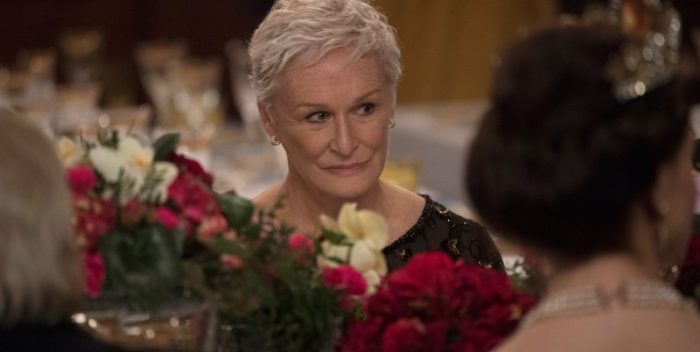 And so the re-watching of movies begins.

We are all wrapped up right now in Lady Gaga, and Melissa McCarthy for terrific lead performances. Next month we’ll have Nicole Kidman in “Destroyer” and Viola Davis in “Widows.” There’s also Olivia Colman as crazy Queen Anne in “The Favourite.” This is a bumper season for actresses.

But Glenn Close was sort of first this year, with “The Wife.” It’s a ‘small’ movie– the only explosions are from Glenn, whose portrait of Joan Castleman, the devoted wife of bestselling literary writer Joseph Castleman, is sly and calculated. You have to watch her eyes as the movie ticks away, and Joan — who seems dutiful– refuses to reveal a secret she’s kept for thirty years. When Close finally blows, the power of the blast could knock out a neighborhood.

Jonathan Pryce plays Joe, and it’s to his credit that he keeps baiting Joan/Close, torturing her and then pulling it back. Joe is a sadist, and selfish, although to the outside world he seems like a pussycat. Don’t discount Pryce’s performance. To get Glenn to her eruption, Pryce just keeps laying it on. When she finally does lose it, you’re surprised she hasn’t just rolled over in bed and killed him years before.

“The Wife” is strangely unique these days. It’s fiction, based on a novel that was inspired by the imagination of its novelist, Meg Wolitzer. Jane Anderson adapted Wolitzer’s novel for the screen. In almost every other movie, actors are playing people either truly historic or “based on a true story.” In the movie a young Joan Castleman (played by Annie Starke, Close’s real daughter, and a terrific actress) gets an earful from an older female novelist played by Elizabeth McGovern. She warns naive Joan that no woman will ever be taken seriously by the publishing patriarchy. I’ll bet Meg, who’s written several terrific novels, and her mother, Hilma Wolitzer, also an acclaimed novelist, could tell us a lot about that. Their experiences, poured into Joan, come whistling out of Glenn Close like steaming water in a tea kettle.

Glenn Close has six Oscar nominations. I dare say she’s waited her turn. “The Wife” — no capes, no escapes– may just be her moment at last.