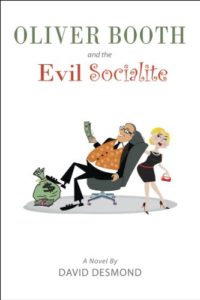 We never hear much about Donald Trump’s sister, Judge Maryanne Trump Barry. She’s a federal judge whom right wingers paint as a left winger because she once signed off on giving constitutional protection to partial birth abortion. (If you wondered why the judge didn’t swear her brother into office, now you know.)

More interesting maybe is Judge Barry’s son, David Desmond, a former clinical psychologist and a self published novelist who– according to his bio– divides his time between Paris and Palm Beach. (He’s the product of Judge Barry’s first marriage.)

Very quietly Desmond has written two novels that he’s put on sale through Amazon. They are farces, or high society satires, starring a main character named Oliver Booth. They are called “The Misadventures of Oliver Booth” and “Oliver Booth and the Evil Socialite.”

Do Oliver and Desmond’s uncle share traits? As one Amazon reviewer puts it: “Oliver Booth is an unlikeable, unsympathetic, unethical buffoon.”

Booth is not a presidential candidate or even a real estate tycoon. But he will do anything to live “the good life” of the super wealthy, starting in Palm Beach and ending up on New York’s Upper East Side. For the first book, Uncle Donald actually contributed a quote, although it’s unclear that he actually read the book.

He said: “David Desmond has written a hilarious tale based on his insider’s knowledge of life in Palm Beach and Paris. It should be a big success.”

One Amazon reviewer who gave the book two stars out of five says: “Oliver Booth craves wealth, acknowledgment and prestige yet he goes about it in all the wrong ways. The more he scams and tries to pry up into the world that he admires the more it detests him and his slyness.”

Another reviewer said: “Desmond wanders through Palm Beach society like a porcupine in a balloon factory.”

Sound like anyone we know? “Oliver Booth and the Evil Socialite” not only sends up the locals in the elite community, we also get a taste of Russian dressing. One character is a rich Russian going by the pseudonym ‘DJ Oligarch.’He’s the king of Russian hip hop and the inventor of the bullet proof tuxedo.

And you think Donald Trump has no connection to the arts!