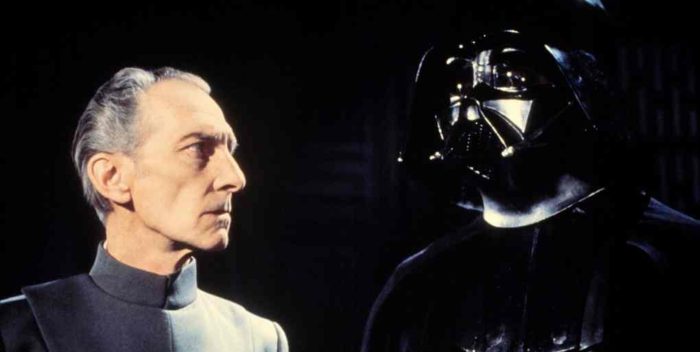 You may recognize some familiar faces in “Rogue One: A Star Wars Story.” After all it’s set just before and around the time of the original “Star Wars” movie.

But one actor from that 1977 film looks a little waxy from the passage of time– and his death some 22 years ago.

Peter Cushing, who played Grand Moff Tarkin, the great villain of the Empire and essentially Darth Vader’s boss, is back. And I don’t mean for a quick cameo or for a minute. Governor Tarkin is really back, as if time has stood still. Director Gareth Edwards has re-animated Tarkin aka Cushing quite convincingly. Tarkin is very busy in scenes with Vader (James Earl Jones) and Orson Krennic (Ben Mendelsohn) as they scheme to take over the galaxy from the Death Star.

Edwards and his team have worked very seriously to re-create Tarkin, and it could lead to a weird trend in movies that want to bringcback dead actors for flashbacks or new scenes. It works here because it’s a one time deal. There’s one other CGI animated character from the “Star Wars” canon in “Rogue One,” but that remains a top top secret.

“Rogue One” opens Friday and could bring in $150 million over the weekend. I have a feeling many fans will see it more than once.