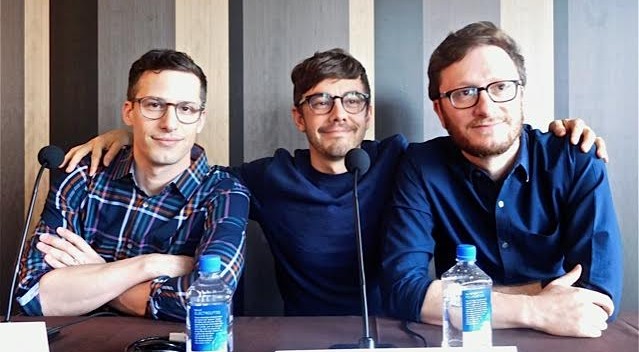 The trio’s parody doc chronicles the saga of boy band the Style Boyz, and the ups-and-downs of lead singer Connor4Real (Samberg). An outsized ego, Connor strikes out on his own, rupturing relationships with his childhood pals and fellow boy band members (Taccone and Schaffer), while at the same time contending with a career that takes a nosedive as his sophomore solo album tanks and fans turn on him.

Produced by Judd Apatow, Taccone and Schaffer wrote and directed the movie parody, which is also co-written by Samberg. Samberg brandishes Justin Bieber-like tattoos and outfits, and the film is obviously inspired by the similarly named Bieber doc, “Never Say Never.”

The Lonely Island parody rappers are Berkeley natives and pals since roomies in their 20’s. Career-wise they collaborated on many successful shorts, including “D**k In a Box” with Justin Timberlake (who makes a notable appearance in “Popstar”), “Lazy Sunday” and “I Just Had Sex.”

The opening and undiplomatic question from a reporter was whether as roommates it was obvious Andy was going to be the star of the group?

Also, when they decided to do the movie about the music business what they felt they could contribute that hadn’t necessarily been done before?

To the first question, Samberg said, “Thank you for asking that.”

“Absolutely, I mean, look at him, he’s gorgeous and multitalented,” added Schaffer, pointing to Samberg.

“We couldn’t walk down the street without strangers stopping us, ‘who is your friend? Who is this handsome hunk of a man, this Fabio-type, beautiful singing voice?’” Taccone said.

Noted Schaffer, “We were 21, 22 years old in L.A. like everybody else, and weren’t expecting anybody to be the star.”

As to what made “Popstar” added to what’s out there about the music industry, Samberg replied, “We felt like was fun to sort of play around with is how much social media and media and the number of outlets that exist nowadays has changed the landscape of the music industry. And from like what is expected of an artist, or what they give up of their own personal life, or how real that is, and the sort of relationship that musicians in the pop world have with their fans now, and how genuine or for the sake of career that is, and how it affects their actual friendships and relationships in their lives.”

Asked whether they favored New Kids on the Block or Beastie Boys in how they portrayed Style Boyz, and who they actually listened to, Schaffer said, “None of us can actually sing, so we’re always gonna favor Beastie Boys, but that’s our personal preference, that’s what we grew up with.”

“That’s definitely what we listen to, also,” said Samberg. “Nothing against New Kids OTB, Joey McIntyre’s got the voice of an angel, we all know that.”

On another track, a reporter asked what was key to their long-lasting friendship?

“Honesty. Communication” – and all three said in unison – “keep it interesting in the bedroom. You have to.”

Asked about Justin Bieber and how he comes to mind when viewing the Connor character, someone noted the movie actually gives you empathy for Bieber and how he has to deal with fame and media. How do they think he would feel about the film?

“We definitely empathize with Justin,” Samberg said, “and are friendly with him. We’ve worked with him a few times and think he’s a good guy, and we respect his music a lot actually. There are a couple direct references, obviously, to his documentary, because we just felt like they were funny jumping off points for a crazier joke. And the title of the movie obviously feels of kind of like his title, which makes it seem like it’s a lot more about him than we intended, I think, but yeah. We hope he likes it, and we feel like the character of Conner is really an amalgam of everything that’s going on in the world of pop music and rap music for that matter.”

“Popstar” features a notable roll call of cameos by big-name pop stars, including Mariah Carey, Ringo Starr, Justin Timberlake and a few that the trio asked reporters not to reveal. How did they get them onboard?

“All kind of ways,” said Samberg. “Some of them were people we worked with before so we would just call them, or email them. Some we did through reps, some people like Ringo Starr, Judd Apatow was the one who called.”

Jorma added, “We don’t have his number.”

“Yeah, we don’t have Ringo on speed dial,” Samberg said. “But yeah, we just sort of cast a really wide net and had a huge list of people we would love to be a part of it and we were actually really fortunate, a lot of them said yes – clearly, a ton of people.”

Since 2013 Samberg has been married to musician Joanna Newsom. Asked whether they ever considered doing a musical collaboration, Jorma cracked, “Oh yeah, why don’t you ruin her career?”

“ I think that her fan base would probably be pretty disappointed in that. And Rightfully,” said Samberg dolefully.

“As fans of her work, I’d say that we would also be pretty disappointed,” Jorma added.

So is there going to be a follow up to Popstar, I asked Samberg after the press conference?

Jorma added, “That’s up to America.”