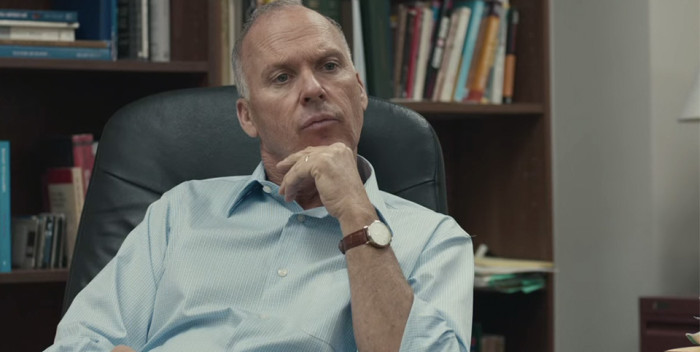 Here’s the deal. A few years ago I wrote that Kate Winslet should be moved from Supporting to Lead for “The Reader.” She was listed on the Oscar ballot as supporting actress for “The Reader.” I discovered that a letter goes out with Academy Award ballots stating that you can move an actor or actress from one category to another. It worked. Kate won Best Actress for her startling work in “The Reader.”

Earlier this year Michael Keaton came within a whisker of winning Best Actor for “Birdman.” He had already won a lot of other awards. He lost the Oscar to Eddie Redmayne, whose portrayal of Stephen Hawking in “The Theory of Everything” is heartbreaking.

This year there’s a big movement to get Leonardo DiCaprio an Oscar for “The Revenant.” I’m not against that. But Michael Keaton is sensational in “Spotlight.” The actors from that movie all wanted to be in supporting. This is a mistake. Keaton is the leader of that ensemble. And his character, Walter “Robby” Robinson holds the key to how the Globe dealt with the “Spotlight” story. Move him, I say. Put Keaton in lead and let’s see what happens.

Ballots go out or can be downloaded on Wednesday. Keep refreshing…

Movies that were inexplicably blown: Youth, Suffragette, Love and Mercy, The Walk

Performances that fell by the wayside: Michael Caine and Harvey Keitel in Youth, Joseph Gordon Levitt in The Walk, Carey Mulligan in Suffragette.

Best song: Til It Happens to You, Diane Warren, from The Hunting Ground

Best score: I loved Howard Shore’s music for “Spotlight.” Ennio Morricone’s music from “The Hateful Eight” is epic. Also really dug “The Circus of Machines” from “Steve Jobs” by Daniel Pemberton. It was a good year for scores. John Williams again? I can’t hear the difference anymore. Does anyone know anything more than the original “Star Wars” theme? It’s like John Barry’s “007” music.

Best cinematography: it’s a toss up between Ed Lachman for “Carol,” and Emmanuel Uzbeki for “The Revenant.” But don’t count out Robert Richardson’s saturated colors that make beautiful tableaux in “The Hateful Eight,” Dariusz Wolski for “The Martian,” or the way Danny Cohen made the “Room” seem bigger than it was.