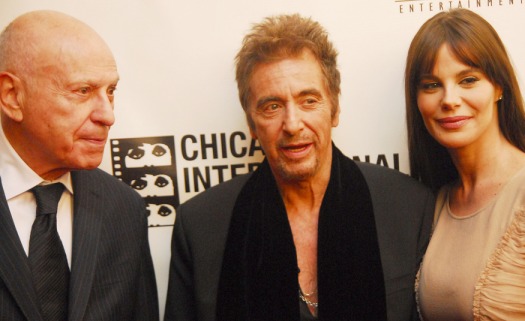 Sunday night and it’s raining, sleeting, sort of awful out. You’d think most people would be at home. But a ton of celebs braved the inclement weather for a movie premiere with Al Pacino, Christopher Walken, and Alan Arkin. The hit-man comedy “Stand Up Guys” is directed by Fisher Stevens, who also has a lot of friends much good will in New York acting circles.

So it wasn’t too much of a surprise at the “Stand Up Guys” screening at MoMA and after party at the Oak Room to find Liev Schreiber and Mariska Hargitay chatting up Pacino’s “Glengarry Glen Ross” co-star Bobby Cannavale and Ben Stiller, who’d come over to congratulate Fisher. And through the night I saw Trudie Styler with actress daughter Mickey Sumner (“Frances Ha” comes next May), and pregnant producing partner Celine Rattray– not to mention British import Lucy Punch (who’s on TV’s “Ben and Kate” right now but should be a movie star) plus TV’s Anson Mount, and “The Good Wife” Julianna Margulies, who’s also in the film and plays a nurse (a little riff on her “ER” days), plus another “Good Wife” star, Josh Charles.

And who was there at the MoMA screening, looking fresh as a daisy? Why, Ronnie Wood, of course. It was only last night he’d played the Barclays Center with his group the, uh, Rolling Stones. How was he? “Never better!” Ronnie declared. “Had a good time, did ya?” Frankly, I’m still exhausted from the amazing show.

During the screening, Pacino, Fisher, Arkin, and Walken, plus co-star Mark Margolis, had a big dinner next door to MoMA a the Modern restaurant. Pacino was dumbfounded by how good it was–he’d never been there before. And it was there I got to see my old pal, Pat Kingsley, the great PR legend, looking youthful and rested in semi-retirement. She still  calls the shots for Al.

Hanging at the Oak Room bar: Chuck Zito with Vincent Pastore, aka, “Big Pussy” from “The Sopranos.” (He’s looking forward to seeing David Chase’s new film, “Not Fade Away.”)

And in the party: Matt Dillon, who rarely goes to anything, told me he came to support Fisher. And there was a corner of beautiful women started by Karen Duffy and Frederique van der Wal.

Alan Arkin is blissfully unaware that he’s a like contender for Best Supporting Actor from “Argo.” When I told him people are disappointed when dies in movies, he retorted: “It’s good practice.”

Also at the premiere, Jon Bon Jovi and wife Dorothea. Jon’s got two songs in “Stand Up Guys,” one of which– “Old Habits”– could be up for Best Song at the Oscars and Golden Globes. http://www.youtube.com/watch?v=BgfYyGqBgYs

The very entertaining “Stand Up Guys” — with this amazing cast, and crazy great moments for each of them– is getting a qualifying run in New York and L.A. for Golden Globes, and opens February 1st across the country.