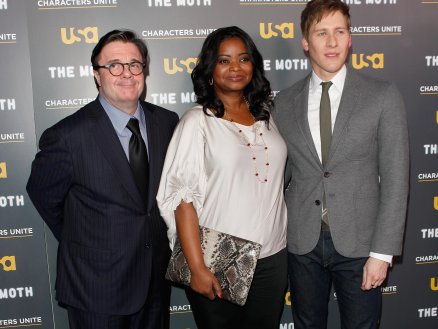 Tonight’s Writers Guild Awards are sure to be lively, even though a number of Oscar nominated films–“The Artist” among them–are not eligible. Nevertheless, plenty of films are up for WGAW Awards. A few nights ago our LEAH SYDNEY went to the WGA’s  ‘Beyond Words 2012,’ in Beverly Hills.  Oscar nominees Alexander Payne (“The Descendants”), Aaron Sorkin (‘Moneyball”), Tate Taylor (‘The Help’), Steven Zaillian (Moneyball, The Girl with the Dragon Tattoo), Annie Mumolo (Bridesmaids), Will Reiser (50/50), John Logan (‘Hugo’), and Stan Chervin (Moneyball’) were on the lively panel, which was moderated by Ron Bass (Rain Man, The Joy Luck Club).

Aaron Sorkin joked that when he got Steve Zallian’s version of the ‘Moneyball’ script before he did his part, “there were typos.”  Annie Mumulo– who wrote “Bridesmaids”– told the crowd that; “Kristin Wiig and I originally had a scene where Annie (Kristin’s character), goes through a forest to an open field where Christian Bale is waiting for her chopping wood.  Judd Apatow (the Executive Producer), put the kibosh on that, telling us…’hmmm, don’t think Christian Bale will do it.”  Annie also said of the megahit ‘Bridesmaids’, which she and Kristin were writing since 2006, “Kristin and I would have been happy if it made $50,000.”

At the after party, we caught up with the wonderful British actor Tom Payne, who plays the tortured jockey Leon Micheaux, on HBO’s hit series, “Luck.” He told us that Executive Producer Dustin Hoffman makes everyone feel comfortable and is just one of the guys.  “Dustin has this wonderful playful nature and it’s infectious on the set.”  “Luck” starts filming its second season next week. It’s an out of the box hit for HBO, and we’re thrilled because it also features our pal Richard Kind in a recurring role.

The other night in LA was just like the kind of cliffhanger for a soap opera “Bold and Beautiful” producer Bradley could think up: President Obama tied up traffic going to Bell’s Holmby Hills estate. Meantime, tons of stars were jamming to get into “Characters Unite,” at the Pacific Design Center, given by The Moth theater company with the USA Network.  Storytellers told tales about their personal challenges.  The impressive group included ‘The Help’s’ Octavia Spencer and ‘J Edgar’ and ‘Milk’ screenwriter Dustin Lance Black.

Host Nathan Lane quipped to the crowd, “I guess we were the only ones not invited to Holmby Hills,” and went on to say, “They have Obama, and we have Octavia!”   Nathan said he was honored to be the host and then added, “As an actor who has a pilot on USA, I figured it couldn’t hurt.  Keep praying that I make it to a 14th episode which has never has happened. Cross your fingers.”  Openly gay Nathan added, “I’ve been faced with bigotry just recently… when I watched the Republican debates.”

Dustin Lance Black recounted his story about being gay and growing up Mormon in a repressive environment.  Sadly he told the audience that his brother, who also was gay and an addict, recently passed away. Octavia told the story of her doing the scene in ‘The Help’ in which she was about to be physically abused and how that changed her.

We asked Octavia how she felt about the night, ‘the more we talk about issues like this, the less taboo it all becomes.”

We asked her about it felt to be the odds on favorite to win the Supporting Actress award come Oscar night?

Octavia- “I never buy into that stuff.  The only time you can is when they call your name.  I’m not nervous about it because it’s beyond my control.”

Dustin Lance Black told us that, “The USA Network and The Moth know how to create change.  They understand that change comes from personalizing the struggle from storytelling.”

Black told me:  “I wrote it because the opposition works so hard to hide the truth, as soon as you know the truth, prejudice melts away.”

How does he feel about Obama? “We don’t have another choice.  The Republicans let a gay soldier be booed on stage and no one stopped it.  We have to re-elect Obama.”