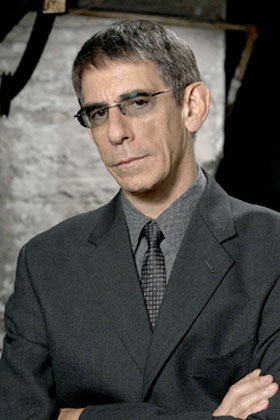 Belzer, who plays Detective John Munch on “Law & Order: Special Victims Unit,” may have been doing some police work at lunch on Friday at Michael’s.

Belzer brought a date, his dog, a cute, sort of white poodlish mix named Bebe. The dog goes everywhere with Belzer. He carried it into the restaurant and placed it on a square white linen napkin that had been laid out on the carpet between his chair and Spitzer’s. Of course, Bebe knows that working for Dick Wolf is a full time job. The dog immediatetly started investigating Spitzer, sniffing his pants leg and circling his chair. This happened not once but several times, as Belzer would scoop up Bebe, then place him down again and the dog returned to Spitzer.

Eventually Spitzer and Linden left. Someone joked to Belzer, “Your character works in sex crimes. The dog must have suspected something.”

Also in Michael’s on Friday: Gibson Guitar hero Henry Juszkiewicz with composer Shelley Palmer (whom I hadn’t seen since college days!), Kerzner Resorts music chief Jerry Inzerillo with gospel and R&B great Bebe Winans. Yes, another Bebe! This one, however, will overseeing a 75th anniversary national tour of Gershwin’s “Porgy and Bess.”

AND MORE STARS IN RESTAURANTS

Chris Noth, in town to shoot his “The Good Wife” series, and Christopher MacDonald, guest starring in the as yet unseen big fall HBO series “Boardwalk Empire” were at Elaine’s last night with Noth’s pal, Steve Walter of the soon to be revived Cutting Room. Elaine’s has music on Sundays, a hot jazz trio. The Chrises sang along and snapped fingers to “King of the Road.” What did they talk about? I heard the whole thing, but was sworn to secrecy. I did hear George Clooney’s name mentioned, and a few other famous names, plus some stuff that can’t be repeated in a family style gossip column!…Father Pete Colapietro did take the mic for a swell rendition in German of “Mack the Knife”…