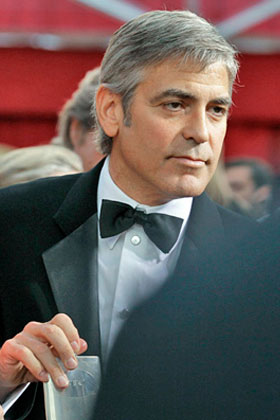 George Clooney brought his girlfriend and his best friend to the Academy Awards. The best friend was silver and monogrammed. It was a flask.

“Hey, pay attention,” he said as he flashed me the flask.

“You can’t drink during the Oscars!” I said, naively horrified.

George is the one person who doesn’t take any of this too seriously. When he debuted in “Up in the Air” at the Toronto Film Festival last fall, the actor and the movie seemed destined for greatness. Clooney, we thought, would be the frontrunner for the Oscar.

At the same festival, Clooney was in “The Men Who Stare at Goats.” Jeff Bridges had a small part in that movie. At that moment, in early September, there was no sign that “Crazy Heart” was being released.

A couple of weeks later, everything changed. Bridges, a five-time past nominee and Hollywood legacy (his dad was Lloyd Bridges) was suddenly the favored Oscar winner. Clooney, who is smart and politic, saw the writing on the wall and backed off.

Clooney, by the way, not only skipped the Governors Ball and Vanity Fair, he didn’t even give his usual private affair for pals. Where did he go? “For a burger somewhere,” surmised a friend.

…Scott Cooper did such a great job adapting and directing “Crazy Heart,” that he’s been approached by a famous literary family.

Cooper tells me that the widow and children of no less than William Styron have asked him to direct “Lie Down in Darkness,” Styron’s first novel. Styron, of course, wrote “Sophie’s Choice” and “The Confessions of Nat Turner.” He was one of our literary lions.

Cooper’s already written the script. Styron’s daughter, Susannah, will be the producer. Now the search is on for the three actors to play the major roles.’ The Styrons, by the way, loved “Crazy Heart” and came to Cooper because, like William Styron, he’s from Virginia. “Lie Down in Darkness” is the harrowing saga of a Southern family’s dissolution.

…Despite efforts to close the lobby bar, it was packed and busy all night. Woody Harrelson and John Singleton held court in there for some time. Julianne Moore breezed through with husband Bart Freundlich. Sarah Jessica Parker and Matthew Broderick spent a few minutes there before heading out early. They have three kids. “We’re going home!” SJP announced. Quincy Jones hung out there for a bit, too. Harvey Weinstein had a deep and meaningful conversation with Rupert and Wendi Murdoch. Miley Cyrus grabbed a soda after her presentation. Melanie Griffith and Antonio Banderas also wandered through.