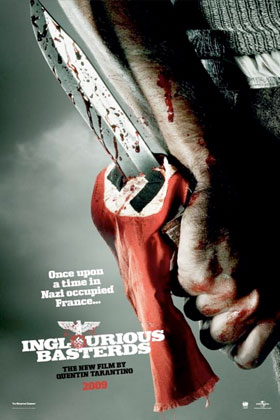 Could Quentin Tarantino’s self described “masterpiece” be the upset winner at the Academy Awards?

Suddenly, the “Inglourious Basterds” are surfing a tidal wave to the March 7 ceremonies at the Kodak Theater.

“Basterds” won the SAG Award for best ensemble cast. Screen Actors Guild voters make up the majority of the Academy. “Slumdog Millionaire,” “Crash,” “Lord of the Rings: Return of the King,” Chicago” and “No Country for Old Men” all went from the SAG Award to the Oscar for best picture. Think back to when “Crash” beat “Brokeback Mountain.” SAG has proven to be a an accurate weather vane.

I told you this might happen. Voters tire of front runners. “Avatar” ‘ despite its technological advances ‘ is not warmly received by Academy members. “The Hurt Locker” has been out there a long time and has many admirers (myself included).

But “Basterds” seems to be a guilty pleasure, especially among Academy voters. It has two things pulling it forward, also: Tarantino, who has rabid fans. And Christoph Waltz, who’s a cinch to win best supporting actor for his portrayal of Nazi Colonel Hans Landa. Waltz is Austrian, but what makes his whole Cinderella story so amazing is that his children are Jewish thanks to his first marriage. His son is studying to be a rabbi. Talk about poetic justice!

There seems to be no question that Kathryn Bigelow and “The Hurt Locker” are on a roll. But there’s also an issue that few people have seen the Iraq war movie. Whereas “Basterds” took in over $120 million at the boxoffice. It’s also a war fable, with inspired madness from a terrific cast including Brad Pitt, Eli Roth, Diane Kruger and Michael Fassbender.

One sign of things to come: that lunch last week in Hollywood. Warren Beatty, Ron Howard, and other big names turned out to support Tarantino.There were a lot of places those people might have broken bread that day, but they’re voters, and they wanted to be seen there. I’m just sayin’…