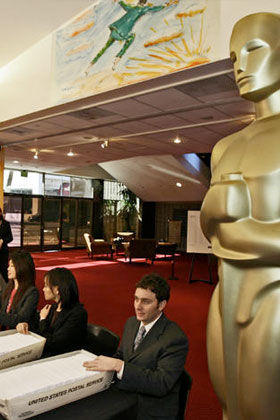 I can’t recall a time when the deadline for getting in those ballots with final votes was so far away! Today is Feb. 10. March 2, when ballots are due, is basically 20 days away. That’s like three weeks!

And time has a way of letting ideas chew themselves over. Like, how did “The Blind Side” and “District 9” wind up as best picture nominees? Is Sandra Bullock really the best actress, or just someone we like a lot?

This year there are 10 best picture nominees. But let’s face it, when you rank them, really five are the best actual films. Those are: “The Hurt Locker,” “Inglourious Basterds,” “Precious,” “Up in the Air” and “An Education.” Well made, well crafted, each as good as anything from a previous best picture list.

Then there’s “Avatar.” No acting, no writing. No real editing, because “Avatar” is essentially a video-slash-cartoon. Its effects, especially the 3D, make it a spectacle. But best picture? Not exactly. The directors and producers guilds already decided that. Maybe it’s the best technological achievement on film. And the glasses were cool!

Front-runners are often harmed in Oscar voting when too much time lingers. Last year, “Slumdog Millionaire” was starting to wear on people. If there had been two more weeks before the ballot deadline, there could have been an upset. Voters start to watch errant DVDs, things they’ve passed up.

Last year, it was “The Reader.” Suddenly there was buzz. It was too late. But this year, hmmm. My guess is, a lot of people who never actually watched “The Hurt Locker” have finally popped it into a DVD player. Ditto “Basterds.” “Up in the Air” is probably getting its due at last.

Anything can happen. But one thing’s for certain: Three more weeks could turn the tide for any of them. Just listen for friends who say, “Gee, I never realized how good [blank] was. It really deserves it.”

And don’t forget: Actors vote for movies with actors, not ciphers, no matter what color they are.