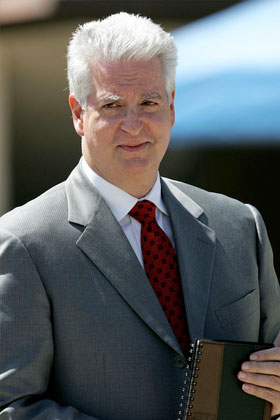 It’s never quite the end for peripatetic Brian Oxman.

The man who calls himself the Jackson family lawyer has finally gotten his disciplinary action from the California State Bar.

According to the Daily Law Journal, Oxman’s probation began Jan. 21. He signed a stipulated settlement with the Bar. He received two years stayed suspension and ‘ get this ‘ must attend ethics school. I know a lot of people who would like to attend that graduation ceremony!

Oxman has been suspended before, in the 1990s. This time his punishment relates to a 2002 divorce case. Oxman represented the wife. He claimed ‘ without ever backing it up ‘ that the husband and his lawyer threatened a marriage counselor.

Of course, maybe he just dreamt it since Oxman has a habit of dozing in court.

The Jacksons had better think of another attorney if they’re going to file a civil claim against Dr. Conrad Murray, now charged in the manslaughter’of Michael Jackson.

This week Oxman tried to pry loose Michael’s medical records from UCLA by saying he needed them to prove an unrelated issue concerning the publication of the singer’s picture after he died. Michael’s estate attorney, Howard Weitzman, quickly pointed out that Oxman was misreading the law.