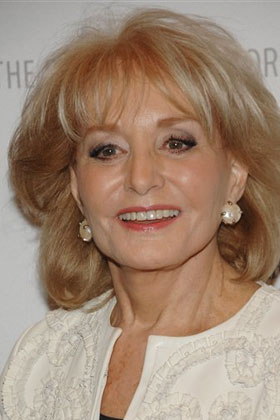 Valentine’s Day approaches, but is it even sweeter for Barbara Walters?

The almost-81-year-old news vixen has had her share of romances, that’s for sure. In her most recent autobiography, she coughed up news that she’d had a long affair with former Massachusetts Senator Edward M. Brooke.

Her past loves included ex-husbands Lee Guber (now deceased, ran New York theaters) and Merv Adelson (former head of Lorimar Productions, the company that gave us “Dallas” and “Knots Landing”). She’s also been linked and inked in the press with everyone from Sen John Warner (Liz Taylor’s ex) to the odious and happily dead Roy Cohn, who was gay and used Barbara as a beard. (He also destroyed countless lives working for Senator Joseph McCarthy in the 1950s.)

Now comes word that Barbara is living with actor Frank Langella (pictured here together), to whom she’d been linked last December. This would make Barbara kinda a cougar and Frank, well, a panther, or maybe just a Lion King. Langella turned 72 last month.

Anyway, a Barbara source says no it’s not true, that they’re just friends, etc. But where there’s smoke there’s fire. Another source’insists it is true. If they are living together, it would be in Walters’ magnificent Park Avenue aerie which is loaded with priceless art. Langella’s done very well as an award-winning actor, but Walters is a multi-multi-millionaire.

Of course, there are’weird aspects to this: for one thing, Langella played Barbara’s old pal, Richard Nixon, in “Frost/Nixon” to much acclaim. ‘He could just be entertaining her with his impression of the disgraced President. And then, of course, Langella once dated Whoopi Goldberg, now the moderator of “The View” and technically Barbara’s employee. At least she’s not dating Star Jones’s ex husband.

So, either way, love is grand, ain’t it?