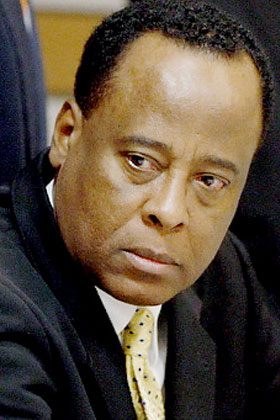 As the world knows, Dr. Conrad Murray was arraigned yesterday and set free on $75,000 bail. The government wanted $300,000. Dr. Murray’s lawyer thought he should just go free. The judge found a middle ground.

Now the case moves to downtown L.A. on April 5 for a preliminary hearing. But my sources say that we won’t have a trial before September, and it could be as long as a year before Dr. Murray has to face a jury of his peers.

Meanwihle, the government scored a point: Dr. Murray, while he waits for his medical license to be revoked, can no longer administer anesthesia. He won’t be putting anyone else out or under. That’s a good thing. You may recall’a story I did last summer: Dr. Murray’s late doctor father also had problems giving patients such drugs. He was suspended for two years. The Murrays apparently like knocking out their patients. A lot.